19 years on from the Omagh bombing, numerous questions remain unanswered. The Government has been less than forthcoming with answers and instead have used the court process to restrict information in relation to informants involved in the atrocity becoming public. 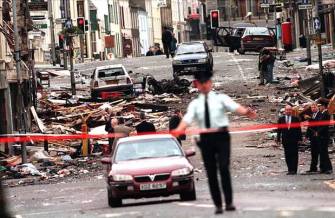 The murderous attack, masterminded by a breakaway faction of the South Armagh/North Louth IRA controlled by Micky McKevitt, resulted in the deaths of 29 innocent people in Omagh. The families have relentlessly campaign for truth and justice, and still to this day no one has been ultimately convicted of participation in the heinous act of terrorism.

In the aftermath of the bombing a registered CID informant, Kevin Fulton, revealed that he had passed details of the potential bombing to his handler. At this time Mr Fulton was, it is understood, behind handled by CID officer Alan Mains- a close friend of the then RUC Chief Constable Ronnie Flanagan.

Alan Mains and Kevin Fulton both appeared at the Smithwick tribunal, which was set up to investigate the IRA murder of senior RUC officers Harry Breen and Bob Buchanan. The tribunal was not informed that Mr Main’s was formerly Mr Fulton’s handler.

It is imperative, in the search for the truth, that the flow of information from informants to their handlers and the activities of security force agents is fully exposed. One of the masterminds behind the bomb is IRA mass killer Colm Murphy. Rumours have circulated in recent years that the Louth republican is a long-time MI5 agent who was recruited in 1985 following a spell in prison for arms offences. He is the chief suspect in the Kingsmill massacre.

Below is a list of all those who lost their lives in the Omagh bombing: