The disproportionate pursuit of Rangers supporters once again provides a stark example of the two-tier policing in Northern Ireland. It must be called out, and resisted using the law. 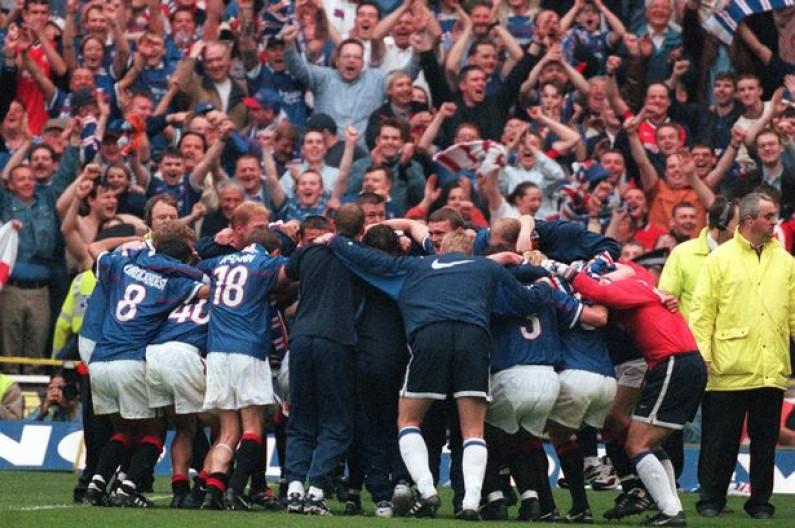 Inside a mere six-days, PSNI detectives from their Criminal Investigation Branch (yes, it is that serious) have descended on the homes on a number of loyalists in pursuit of the priority investigation (this week’s Sinn Fein direction) flowing from Rangers fans gathering to celebrate the club’s 55th league title.

Let us contrast this swift PSNI response with how they handled the IRA funeral of Bobby Storey, to take but one example. Firstly, they assisted in the planning of the funeral (deploying their own perverse understanding of the law as they applied it to Black Lives matter protesters, they should probably interview themselves under S.44 of the Serious Crime Act).

Then the PSNI took no action at all in relation to the potential offences, until this writer publicly pointed out that the Covid-19 offences had a six-month statue of limitations. No doubt cursing the reality that their efforts to run the clock down had been rumbled, we then had the bizarre situation whereby letters were sent to a handful of republicans (just over twenty out of thousands of gatherers, I believe), thus beginning a ‘negotiation’ as to a potential voluntary interview. Readers unfamiliar with Northern Ireland’s two-tier policing system post-Patten may think I am joking; believe me, I am not.

There is quite simply no reasonable, plausible or serious explanation for this grave disparity of treatment. The only conclusion is that once again it is a stark example of how all operational policing is ultimately subservient to the overarching requirement to act in a manner compliant with Sinn Fein and their supporter’s demands.

When PSNI need to, apparently, ‘restore confidence in policing’ in republican communities (which is code for ‘show us how committed you are to the ‘process’ of nationalist appeasement, get out there and hammer the Prods’) they inevitably launch a disproportionate assault on working-class loyalist communities to atone for the ‘offence’ they may have caused republicans by even trying to keep up the pretense of treating everyone equally under the law.

That is why in the wake of the political pressure heaped on the Chief Constable following the incident at the Sean Graham bookmakers commemoration, that PSNI jumped on the opportunity- flowing from a minor non-violent public order issue in East Belfast- to show their credentials by making nineteen (yes, nineteen) arrests under the Terrorism Act in less than three weeks. Is there anyone that could imagine nineteen arrests of Sinn Fein supporting republicans under the Terrorism Act in a decade, never mind three weeks?

When Gerry Kelly caused an affray by surfing a PSNI landrover, which led to thugs violently smashing the side of the police vehicle, did we see the PSNI reach for the ancient book of common law offences or the Terrorism Act?

Of course not; the PSNI bent over backwards to brush it under the carpet to appease Mr Kelly (a convicted IRA bomber who shot a prison officer in the head) and Sinn Fein. In keeping with the post-Patten template, republican perpetrators must be feted as if they were in fact the victims.

When Sean Kelly- the Shankill bomber- engaged in an affray, brandishing some form of weapon in a public place, did the PSNI descend on his home in a dawn raid? Did they charge him and seek to remand him in custody?

Of course not, they invited the Shankill bomber for a pre-arranged voluntary interview at a time of his convenience.

I could write a book of examples, but most people can now see what has been patently obvious for over a decade; there is two-tier policing in Northern Ireland. It is not a perception, it is reality.

Leaving aside that uncomfortable truth, it is plain that the PSNI continue to be legally illiterate, especially in relation to their obligations under the Human Rights Act 1998.

The Covid regulations are made via secondary legislation. The prohibitions contained therein are not the final word. They are subject to the obligations within Section 6 (1) of the Human Rights Act, which requires public bodies (of which the PSNI is one) to act in accordance with Convention Rights.

For present purposes the PSNI must have regard to Article 7, Article 10 and Article 11. Given the nature of the regulations, many legal scholars have expressed the view (with which I agree) they are in of themselves in fact in breach of Article 7, however for present purposes we need not go down that specific path.

The gathering of supporters plainly engages Article 11 of the Convention. Any interference must therefore be in accordance with law, which in addition has a distinct stand-alone quality of law requirement similar to Article 7; in pursuit of a legitimate aim; and necessary in a democratic society. The latter condition imposing a proportionality test.

There is no evidence that the PSNI are aware (despite it being set out for them in College of Policing guidance and the Policing Board Human Rights review of Covid policing) of their obligations, let alone any tangible evidence or reason to believe they have given due consideration to Article 11 before descending on persons’ homes demanding they consent to an interview.

No one should consent to a notebook interview, regardless of the inevitable yarn the officers will spin that “it will be quicker, and save you having to go to a police station”.

Everyone is entitled to legal representation and advice. In unrelated circumstances a lady I know telephoned me some time ago for employment law advice after being falsely accused of an assault in the work-place. I came to her place of work, only to find the PSNI already there. The lady was shaken and informed me the officers had told her she should just do a ‘notebook interview’ to get the matter cleared up. Err, no. The lady, as with everyone else, was entitled to consult a solicitor and to be afforded basic legal rights as she was facing a criminal allegation.

Moreover, no one should accept a fixed penalty if offered. Thus far I understand none have been offered. In keeping with the disproportionate and differential treatment of the loyalist community- the ‘Four Es’ are abandoned, instead going straight for the nuclear option of sending CID to the door.

The gathering of Rangers fans is not as straightforward for the PSNI as you would imagine. The great thing about the criminal law is that it has rules and procedures, which ultimately can not be subverted in the long run (try as the PSNI may in the short-term).

A family in their own bubble who intended to peacefully gather socially distanced to celebrate would not prima facie be in breach of the regulations simply because other family bubbles had the same idea. Remember the burden is on the PSNI to prove the intent, not the suspect.

They have quite the road to travel to establish any such intent, even in light of circumstances whereby there may have been ex-post facto admissions in the media or on social media. There are very well-founded admissibility issues which would arise in relation to such ‘confessions’.

All of that comes even before the Human Rights Act comes into play. In relation to Article 11 there is a series of exacting conditions which must be satisfied to justify an interference, and mere reliance on vague and ambiguous secondary legislation in of itself just doesn’t cut it, I am afraid.

As aforementioned, if the intent was to gather socially distanced, then in the absence of the PSNI- to the required evidential standard- being able to disprove this defence, it is difficult to see how any interference within Article 11 would be proportionate or necessary in a democratic society.

There is a worrying trend within unionist communities of complete deference to the PSNI. I have encountered it repeatedly through Covid. Decent law abiding families who when the PSNI have called based on some bogus report on the Covid ‘snitch line’, willingly let the PSNI enter their private home to rampage around. They have no powers of entry; all citizens should have politely but firmly asked them to leave the property unless they had some lawful basis for being there.

There is further reluctance to use the Ombudsman, Policing Board, Human Rights Commission or other accountability mechanisms. There is a self-defeating deferential attitude whereby the police are always right, and even if they aren’t, they are decent spuds doing their best so we should just suck it up. Sorry, but no.

Unionist and loyalist communities are as entitled to demand fair treatment by the police as everyone else. We are not cannon-fodder or low hanging fruit. If political unionism wishes to support the cause of equality under the law when it comes to policing, then great. If they wish to tip-toe around it with quiet deference to the PSNI, then that is a matter for themselves, but it does not neutralise the accountability mechanisms available to all persons. Those can be deployed and utilised by any member of the community acting entirely alone.

Moreover, it is right and proper to demand that those accountability mechanisms treat a complaint from a community without the political support that republicans or others have, with the same level of respect and seriousness.

No Rangers fan should make it easy for the PSNI. If they want to try and pursue supporters, then let them work for it and do so within the law. Given the disproportionate treatment of loyalists vis-à-vis republicans, let them explain their two-tier policing within the parameters of the accountability mechanisms.

Ultimately the only way to put the brakes on an increasingly out of control PSNI is to bring them to book using the law. This is a perfect starting point. Turn anger into activism.