Jim Wilson is a former loyalist prisoner, a negotiator during the Belfast Agreement and a long-time community activist in East Belfast. He was one of the most ardent campaigners for the Belfast Agreement, but he now says the Agreement has turned out to be a sham, and he challenges the inequality under the law inherent within policing. 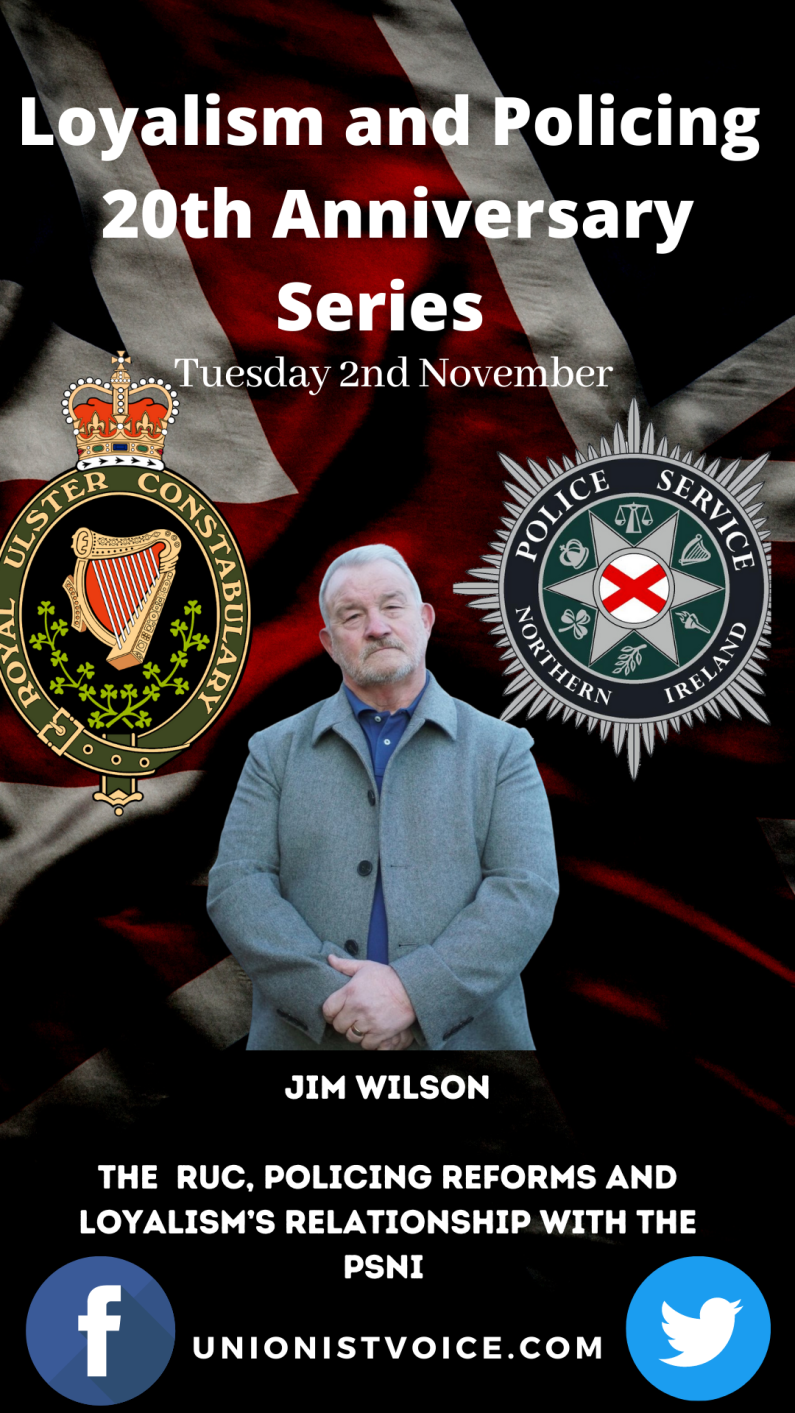 I was nineteen years old when I was arrested and interned in Long Kesh. I need not point out the obvious reality that this transpired without any due process, any evidence of any offence being put to me. If you were to listen to the historical narrative, you would believe internment was purely directed towards nationalists, this is plainly untrue and I can attest to this reality as someone who was unjustly imprisoned as part of that policy.

Prior to being interned I witnessed a lot of RUC harassment of loyalists, and moreover a lot of convictions and loyalists being sent to prison. These facts are contrary to the republican narrative that there was some kind of cosy relationship between the RUC and loyalists.

It is of course the case that there were some in the RUC who were sympathetic, and this was more so at times after they had encountered republican terrorism, witnessed some of their friends being murdered or perhaps got fed up with the IRA onslaught. This is understandable in the context that there was a shared enemy, but there was certainly no policy of ‘friendship ‘ towards loyalism.

Let us not forget that there were significant levels of Garda collusion with the IRA, as found by Judge Smithwick. That is conveniently brushed under the carpet because it doesn’t suit the narrative.

In 1998 I was a supporter of the Belfast Agreement, mostly because I felt we had to give peace a chance. I campaigned for it and supported it, but within two years I had seen that it was basically a green, white and gold document and set these feelings out in an interview with Mike Nesbitt, who was then working for the Belfast Telegraph.

The agreement as it was sold to loyalists was a sham, we were lied to and systematically misled. It was always about appeasing republicans and in hindsight it was always designed to advance their agenda whilst criminalising loyalism in order to weaken any credible resistance to advancing towards arriving at republican’s ultimate agenda.

During the negotiations on policing reforms, of which I was part, there wasn’t infact massive concern amongst loyalists about changing the name from the RUC to the PSNI, because we felt they had treated us every bit as badly as they have treated the Provos. There was no love lost between loyalism and the RUC, especially after the pronounced confrontations over the Anglo-Irish agreement and the manufactured (by nationalists) parading disputes of the 1990s.

In pursuit of gaining nationalist support for policing, the PSNI from its very infancy were determined to bend over backwards to achieve this core objective, no matter the consequences for the rest of society.

This has been proven correct, as ever since the formation of the PSNI, their overriding objective has always being maintaining the support of nationalism and this has outworked itself via constant appeasement of republicans.

I recall when Claun Place, a small loyalist enclave, was under siege with over seven days of petrol bombs and gunfire into the area. The PSNI did not have one land rover in the Short Strand, they simply vacated the area and left the people of Claun place defenceless. This all came about after a senior republican had an altercation with the PSNI, and claimed he had been beaten- due to fear of reprisals, the PSNI refused to go into Short Strand.

It was not until five days after the shooting from Short Strand into Cluan Place that the PSNI arrived under the pretence of carrying out an investigation. The people of the area laughed at them. As ever with the PSNI, any investigation into republicans is only ever for the optics and offers nothing of substance.

In terms of my own frontline engagement with the PSNI, we as loyalist community representatives used to meet with them yearly about parading and other issues, probably from January onwards. In 2013 it was well publicised that the returning 12th parade was attacked from Short Strand. The PSNI had promised us that there would be ‘mirrored’ policing on both sides of the divide. It transpired that in fact all the PSNI resources were deployed on the loyalist side, whilst ‘policing’ of the republican Short Strand was left to Sinn Fein.

This again demonstrated that it was one rule for nationalists, and another for loyalists. It showcased for our community the two tier nature of policing, and nothing has changed since then.

In 2021 a number of Rangers fans, me included, were approached by the PSNI within days of Rangers fans celebrating winning the 55th league title. This simple incident sent it all for me, and put the final nail in the coffin of any remaining trust our community may have had in policing. Whilst the IRA show of strength at the funeral of Bobby Storey did not even attract so much as an approach from the PSNI for over six months, a few loyalists peacefully celebrating a league title was disproportionately acted upon within days. That contrast is stark and once again is proof, if anymore is even needed, of the two tier nature of policing.

The Belfast Agreement policing reforms were supposed to be about creating equal and fair policing for all. Everyone equal under the law, and equally subject to the law. Sadly the opposite has happened, for our community it is very much inequality under the law as policing remains firmly wedded to its initial objective of winning nationalist support.

A short time ago I spoke to a republican taxi driver who was doing a tour. He said to me “the boot is on the other foot now, it is on your necks”. And he was right.

If the PSNI can not see, or recognise, just how much they have lost the confidence of our community then they are totally disconnected from reality, or else they are willingly content to marginalise, criminalise and ostracise one community.

Loyalism again and again stretched itself over the past two decades, but even for those of us who championed the agreement and reached out more than most, enough really is enough.