A leaked email outlines how the PSNI sought to come to an arrangement with the republican Felons club to withdraw any objections to the club. Simultaneously the PSNI continue to press such spurious allegations against social clubs within the loyalist, with no such offers of undertakings or agreements. 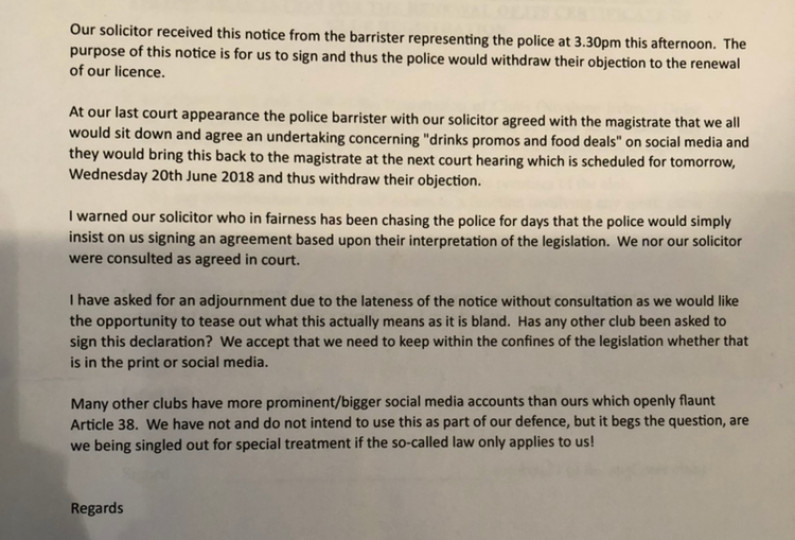 A leaked document obtained by Unionist Voice shows that the PSNI sought to obtain a simple undertaking from the republican Felons club not to advertise on social media, in exchange for dropping any objections to their clubs registration.

A social club has to be registered in line with the Registration of Clubs Order 1996. This application has to be approved by a Magistrates Court.

In this case the PSNI offered to withdraw their objections to the Felons club, if the committee would sign a simple undertaking in relation to advertising. Police have raised this issue, and other minor technical issues, with clubs within the loyalist community, but rather than offering an undertaking to withdraw their objections PSNI have robustly sought to have the clubs shut down.

The PSNI are currently objecting to the registration of a number of social clubs in loyalist areas, some for the ‘crime’ of what the PSNI say is advertising their events on social media.

It is very clear from the email obtained by Unionist Voice, which was sent by a named member of the Felons club- whose identity we have withheld as there is no public interest in revealing his personal details- to the Federation of clubs, that the PSNI were extremely keen to provide an easy way out for the Felons club.

There are similar issues raised with clubs in loyalist areas and the PSNI have no offered any such simple resolutions, instead robustly seeking to have the clubs shut down.

This again demonstrates the disparity in policing in terms of how social clubs in nationalist areas are policed in comparison to those in loyalist communities.

The email- sent on the 19 June 2018 at 23:12- makes clear that the Felons were not willing to accept the PSNI’s olive branch; it is believed however that their objections to the club were dispensed with anyway.

It is clear that the PSNI are raising spurious objections to loyalist social clubs, and seeking to trail them through the courts in the process, whilst treating such equally ridiculous allegations less robustly when it comes to the nationalist community.