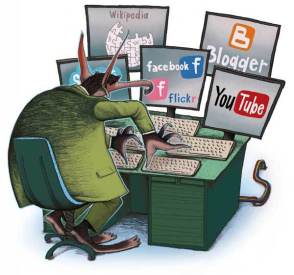 In George Orwell’s 1984, the ideologically hypnotised masses were treated to the spectacle of ‘two minutes’ of hate. The villain of the day was held up on the contrived, manipulated and controlled altar of public opinion. The crowds would duly unleash a wave of abuse and hatred at the individual. Of course, no one would invite the dissenting ‘villain’ for debate, nor would his or her views be challenged.

The mere image of their face, coupled with the repeated assertion that they had engaged in some form of political blasphemy, was enough for the crowd to cheer, and scramble to join in the public execution.

In 2017 we see similar, only the self appointed ‘elite’ do not have to go to the hard work of bringing citizens into a theatre. The hypnotised pack seek out their own villains by identifying unacceptable social media comments; namely those that do not fit with the ‘acceptable’ political views, decreed by the elite. Anyone that agrees with such dissenters is also likely to find the gang metaphorically amassing outside their door, ready to club them to death for siding with the ‘unacceptable’ ones.

Of course we also then have ‘satire’ sites that perpetuate the villain theme, and provide a gathering place and roadmap for the mob. They encourage the mass mocking of those deemed unacceptable. This is justified by claiming a higher moral purpose of outing ‘sectarianism, racism, or bigotry’, but that masks the real purpose, which is to try and bully dissenters into submission under a tide of public ridicule.

It is a means of forcing political viewpoints on others by bullying, harassment and intolerance. Those that hold themselves up as the most tolerant, ascribe to their own political views a moral superiority. They cloak others views as ‘sectarian, racist or inhuman’ in order that they can elevate their own political opinion above the realms of reasoned debate; in their mind they have decided any other viewpoints are contemptuous and inhuman, whilst their views are built upon ‘rights’ and ‘equality’ (these words can be used interchangeably to denote any political demand).

The irony is that most of the ridicule is driven to target a person’s looks, speech or their personal life. It seldom seeks to provide a substantial rebuttal of political points. It exists to deny those deemed unacceptable the right to hold a public opinion, and to enforce their isolation by public bullying. Strangely enough the personal abuse by the ‘satirists’, hiding behind a modern day mask of social media pseudonyms, often reflects their own deeply held insecurities, and more often than not, self loathing.

I have found it extremely enlightening to read the back-story to some of our local ‘trolls’ and ‘satirists’. In one case it was explained that an individual felt that trolling helped him during a low point in his life. It provided an outlet for him. In other words, he felt bad about himself so by projecting this self-loathing onto others, he felt better. I actually felt sorry for the individual. He trolled as a form of therapy.

Of course, he couldn’t get this therapy in the real world, because marching down the street with a baseball bat and screaming ‘c*nt’ in the faces of anyone they disagreed with, wouldn’t be socially acceptable. But in the realms of social media, they were able to do exactly the same thing and project themselves as a normal, functioning and stable individual. That is why many internet trolls are socially awkward in the real world, their comfort blanket is the somewhat more relaxed norms of social media, whereby projecting your own self-loathing onto others can be called ‘satire’, or lovable ‘trolling’.

That, however, whilst helping those troubled souls that engage in trolling therapy, doesn’t make life any easier for some of the victims. I am used to trolls and daily abuse, it doesn’t particularly bother me, except for when it is targeted towards my child. A number of times over recent months I have been trolled by people calling my child a “bastard”. He is two years old, even if the self-loathing of the individuals concerned causes them to seek therapy in the form of abusing others, surely abusing a little boy simply because of who is father is, is beneath contempt?

One prominent politician qualified their somewhat reserved condemnation of my son being called a “bastard”, by pointing out that it had to be viewed in the context of the fact that I do not support same-sex marriage. Of course, they didn’t phrase it like that, instead saying that I wanted to ‘deny rights’. As such they claimed a moral superiority for their own social and politician position, which- in their mind- leaves anyone who doesn’t agree with them standing condemned as an inhuman regressive individual. It was understandable that someone would call my child vile names, because after all, I am a supporter of ‘rights’ abuse (in their mind).

For others, who simply express an occasional opinion, and who haven’t willingly thrown themselves into the fray, the trolling and abuse can have a deep and painful psychological effect. If someone is not used to being pursued by a baying mob, it can be an extremely hurtful.

Would it not be somewhat unsettling to see 30 people chasing one individual down the street, spitting at him, screaming abuse at him, telling him he shouldn’t be alive because of his political views and chanting in unison that the individual should ‘go away’?

Would it not be even more bizarre if the amassed mob then began seeking further help from the police. Imagine it; a baying mob surrounding one person and screaming abuse in his face, yet the same mob are yelling to the police, “come and help us, stop this man speaking, he is so dangerous, you must stop him speaking.”

The harassing and abusive mob don’t even scream political insults at their victim. Instead they mock their appearance, or weight, or speech. They abuse them, telling them that they aren’t good enough, that their views aren’t acceptable. The mob justify this by saying that they are doing it to protect ‘fairness’, ‘equality’ and promote ‘rights’. It is unknown who bestowed the status of arbitrators of political rights and wrongs upon this mob, beyond their own collective belief that it is their job to enforce the ‘progressive’ agenda.

Similarly, any appearances on the mainstream media by those not approved by the ‘elite’ is met with hell, fire and brimstone. Social media swings into action, like a pack of school yard bullies demanding to know why the black sheep has been picked to perform in the school play, ahead of those- in their mind- who are more worthy. Quite who arbitrates upon, or sets the criteria for this worthiness is, as yet, unknown.

We even have so-called professional people, including journalists, that whip themselves into quite the state if any of the ‘unworthy’ are permitted a platform to articulate their views. They cloak this as concern that some of those offered a platform have no mandate, but fail to find similar annoyance when those they approve of- who have no mandate- receive a similar platform.

I was on RTE around two weeks ago. Watching the twitter reaction was quite the experience. 95% of the contributions attacked my appearance, abused me personally, mocked my speech, ridiculed my very existence and demanded that I been banned from the media, and even in some extreme cases people wanted me thrown of twitter, or unverified.

Only around 5% of people sought to challenge the political arguments that I put forward, the rest simply felt the need to club to death someone that they had identified as a legitimate target. Other professional people had to tell the world that I was a “clown” or a “balloon”. They made this pronouncement without challenging a single argument I had put forward.

The baying mob aren’t the radical, or strong ones. It doesn’t take intellect or emotional strength to hunt with the pack, to sneer and ridicule the figure held up on the public altar of hate. The strong and radical people are those that get clubbed to death by the baying mob day after day, but continue, with a smile on their face, to make their arguments and stand fast in their own beliefs.

I finish with a quote from Margaret Thatcher, who summed it all up many years ago;

“I always cheer up immensely if an attack is particularly wounding because I think, well, if they attack one personally, it means they have not a single political argument left.”