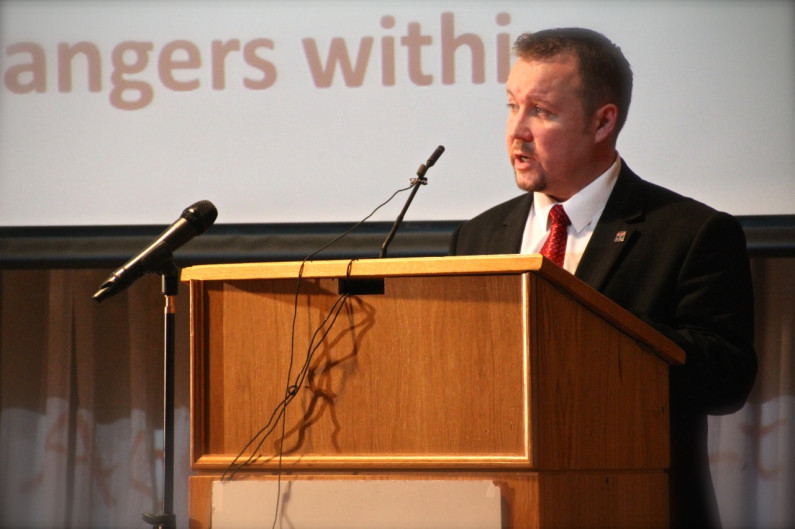 Twenty two years ago last week, the Belfast Agreement was foisted upon a weary and desperate electorate.

The coercion and emotional blackmail, intertwined with lies and false claims, embraced an undercurrent of sinister insistence that it was this way, or all hell would break loose.

The amount of propaganda used by the government reached new heights and plumbed new depths.

‘Think of the children’ was one of the clichés; ignoring the fact that rewarding and elevating terrorists would result in even more polarisation between communities and afford more influence and political cover to paramilitaries.

Root and branch change to the greatest anti-terrorist police force in the world, the Royal Ulster Constabulary G.C. was accepted by yet another spineless government at the behest of the provisional IRA as part of the disgraceful and immoral pay off, following on from just over a handful of years after the dilution and removal of the Ulster Defence Regiment CGC, shamelessly sacrificed as part of the one way appeasement process, a process that continues unabated, and unhindered to this day.

At the heart of this hideous appeasement, was the need for successive British Governments to avoid any further economic damage to the mainland in general and the City of London in particular.

The canary wharf bomb* cost more than any other incident in the entire troubles, a fact quickly understood when viewed in the nauseating timeline of the resulting and inevitable volte-face when admitting the representatives of the IRA into talks after the prolonged standoff, engineered upon a superficial veneer of pretence.

The Manchester bomb a few months later exemplified the new tactic of hitting the commercial targets in GB.

Whitehall was in meltdown.

And so it began.

After months of procrastination from British and Irish Governments, tactical toing and froings, including the worthless Mitchell principles, (and the publication of the Framework Documents, emphatically endorsed by newly elected Blair and crucially, rejected by every single Unionist party as any parameter for any future agreement), the stage was being prepared for the republican movement to enter formal talks, carefully ensuring at each step, the various hawks and doves were kept on board.

Eventually, under PM Blair, IRA representatives were legitimised and accepted into the democratic fold, even though they still had an active and armed military wing, as they still do to this day.

Those of us with morals rebuffed this vital and crucial premise, and refused to accept armed terrorists and their proxies included in any all party negotiations on the constitutional future of this part of the United Kingdom.

Concessions flowed; goodwill and honesty from republicans did not.

Months of manipulation followed with the media compliant and willing to follow the line until eventually, the dirty deed was done on Good Friday 1998.

Sacrilege of the worst kind, but not unexpected from Blair and his unscrupulous cabal.

Consequently, as an out-working of the putrid process, some of the most dangerous and violent terrorists were released* to appease their leaders in suits, with many to adorn similar attire and be welcomed into the fold and aboard the peace process gravy train.

The UUP crumbled under pressure and rolled over, acquiescing to mandatory coalition, resulting in placing the very representatives of the IRA army council, (and some actual members) into the executive government of N.I.

The final insult was to stomach at first hand the election of the IRA terrorist responsible for opening up on the Parachute Regiment on what became known as Bloody Sunday (with a Thompson machine gun, for those interested), Martin McGuinness, as education minister.

I will never forget that surreal moment sitting in the Stormont gallery, the echoes of ‘think of the children’ repeatedly reverberating through my mind.

IRASF insisted from the inception of the Belfast Agreement that it was not a final settlement.

A fact ignored by many, they still view it as a transitory vehicle to achieve a United Ireland.

My thoughts today, 22 years on?

The culmination of a complete collapse of morals which has polarised our communities and a clear formalising of the appeasement of terrorism, which has elevated same.

A dark day for N.I