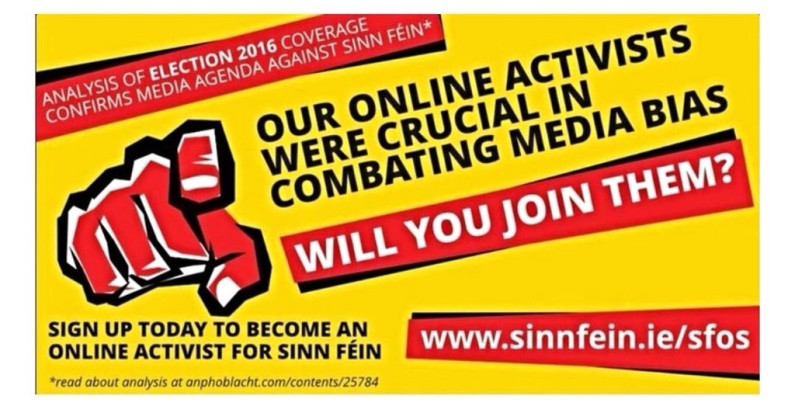 In October 1988 the British Government introduced the controversial broadcasting ban that meant senior Sinn Fein figures such as Gerry Adams were banned from speaking on the airways, it resulted in a walkout by BBC staff who later circumvented the ban by using actors voices when interviewing people such as Adams and then party press secretary Danny Morrison.

But that was 30 years ago and since then the poacher has become the game keeper and now it is Sinn Fein who are manipulating the media into operating within parameters set by the republican party to push a one sided agenda.

Commentators from the unionist community who are anti-agreement, or at the very least critical of it, are the targets of a relentless Sinn Fein attempt to have them silenced. This ranges from orchestrated trolling campaigns, to trying to bully media outlets into silencing unacceptable voices.

You will notice how gangs of republican trolls work in unison online to target various people. This takes the form of a number of twitter accounts relentlessly targeting someone and trying to encourage other social media users to join in. These campaigns are clearly orchestrated by a number of anonymous accounts, and whilst on the surface it may appear that it is simply the work of a number of deranged and obsessive lunatics with too much time on their hands, when you take a closer look it is in reality a gang of persons deploying the same tactics against a number of selective targets on a pretty regular basis.

Sinn Fein actually advertise on their website for ‘social media activists’. This is a fancy word for an army of trolls. This is run by a youthful Sinn Fein social media team, with other accounts such as @thestalker32 operated from the Sinn Fein press office by experienced members of the party.

The interesting thing is that it is deemed acceptable to troll and target people like me, Jim Allister, Nelson McCausland, Ruth Dudley Edwards, Mairia Cahill, Ann Travers and Austen Stack; yet if such an orchestrated campaign was waged against a member of Sinn Fein, then there would be outrage.

The Sinn Fein press office, run by Sean Maguire, who was previously reported in the mainstream media as an informant, are increasingly behaving like feudal overlords, seeking to dictate to the media who is permitted to engage in public discourse, and who isn’t. A quick look at Maguire’s twitter account and you will find an almost daily criticism of a media outlet who haven’t been abiding by Sinn Fein’s instructions.

Above: Sinn Fein’s spin doctor Sean Maguire, who regularly tries to bully the media into conforming with Sinn Fein’s wishes.

Sinn Fein’s press office is out of control, the orchestrated #BoycottNolan campaign being one example. The light was shone on who was really orchestrating that campaign for political purposes, and very quickly Sinn Fein had distanced themselves from it and broken their own boycott.

Much of their press office’s time is spent urging outlets not to allow a voice to Jim Allister, claiming he has a small mandate, and outright refusing to engage in debate with commentators such as myself and Nelson McCausland, claiming that they won’t engage because we aren’t elected. This also takes the form of trying to bully the media into only having contributors on that are pre-approved by Sinn Fein.

This is strange, because they have no issue engaging with unelected commentators such as Alex Kane and Chris Donnelly. Sinn Fein have no problem inviting unionists for them to showcase at their events who aren’t elected, and for their MLAs and MPs to share platforms with such persons. That makes a bit of a mockery of their assertion that they don’t engage with people who aren’t elected.

What they really mean is they won’t engage with people who do not fit into their ‘New Ireland’ agenda. If you sing of this hymn sheet, then not only will Sinn Fein hoist you up as an ‘acceptable unionist’, they will also devote the whining voice of Sean Maguire to trying to urge the mainstream media to promote such persons, and censor anti-agreement unionists in parallel.

This from the party that spent years claiming censorship and who had their voices banned from the media. In a ‘New Ireland’ Sinn Fein will welcome all unionists that are acceptable and compliant. Such persons will be promoted by Sinn Fein and made welcome on the mainstream media.

Of course, anti-agreement voices are not what Sinn Fein want to hear, it doesn’t suit their political agenda. So as a result they use their press office to try and bully the mainstream media into censoring such voices. There is a duty on the media not to cave into this bullying and intimidation. We either have a free press or we don’t.

It is interesting this assault on ‘unacceptable unionists’ began in earnest after Sinn Fein blamed Stephen Nolan for allowing Jim Allister, Nelson McCausland and myself on his Radio program on the morning the Irish Language Act was to be agreed. Apparently such ‘negative’ voices contributed to the deal collapsing. I certainly hope it did.

Last week, after Unionist Voice published a piece criticising the soon to be released ‘Glenanne gang’ documentary, Seanna Walsh urged the film maker not to engage with discussing any of the substantive points of the piece with me, because I was not a ‘real unionist’. I take this as a great compliment. If the day comes when my unionism meets the approval of someone like Seanna Walsh, a notorious IRA terrorist, then I will have to seriously look at myself in the mirror.

So here’s a question for the Sinn Fein press office. Have any of your press officers urged any mainstream media outlet to drop ‘unacceptable’ unionist contributors, threatening that Sinn Fein will not engage with such outlets if they do not comply?

Sean Maguire and the Sinn Fein press office may think they can skulk about in the darkness bullying, threatening and working to censor voices of which they do not approve. It’s time we had a little bit of a light shone on such behaviour.

The media are aware of all of this, because it is they are on the receiving end of Maguire’s strong arm tactics. Therefore they do not need to look very far in order to expose the attempts by Sinn Fein’s press office to have people, of whom they don’t approve, censored.

Stand up to them, or else roll over and allow a political party to dictate who is allowed to be heard, and who isn’t. Where does it end? Will Sinn Fein be vetting news stories before they are published soon?

The media were, rightly, good enough to go after the draconian practices of the DUP’s Timothy Johnston and John Robinson in trying to stifle debate and control the media, it’s about time they applied the same scrutiny to Sinn Fein and their out of control press office.