The inherent bias hardwired into the PSNI is obvious to all those who take even the most elementary interest in public affairs in Northern Ireland. 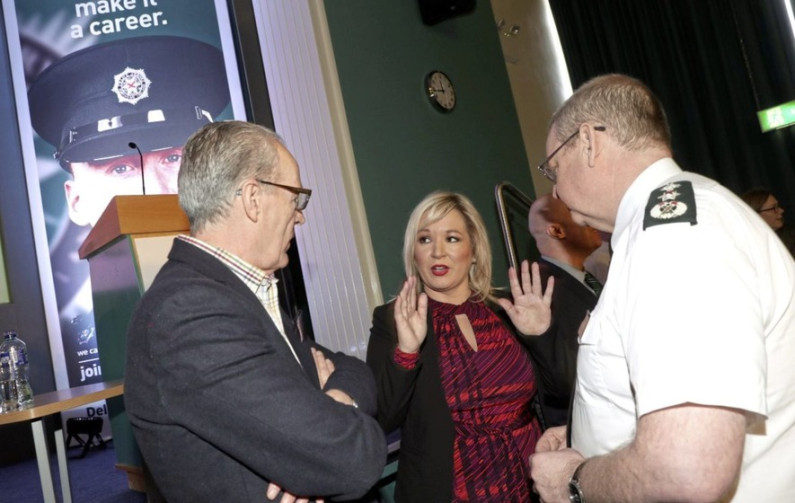 Policing was conceived in the womb of political appeasement. The organisation came into being based on the proposition that the RUC had to be disbanded, because it commanded no support from the nationalist community.

And thus, a police service was created with a core objective of winning nationalist support. All things, including operation policing decisions, were- and are- subject to the maintenance of that overriding core objective.

The ruthless dedication to the destruction of the RUC and shaping policing to at all times maintain nationalist support has naturally led to twenty years of a police service that operates on a fundamentally ‘two-tier’ system. The core ethos of the PSNI is derived from the inherent imbalance hardwired into the organisation by virtue of its founding objective.

It is for this reason that the PSNI direct disproportionate resources towards the broad-brush criminalisation and harassment of loyalist communities, whilst granting de-facto immunity to the IRA and those under the umbrella of the mainstream ‘republican movement’.

This is true not only in relation to legacy (whereby the PSNI have been shamefully imbalanced and almost assisted in re-writing the past, including to demonise the security forces) but also when it comes to the ongoing criminal activity of those linked to the IRA.

The creation of the Paramilitary Crime Task Force (‘PCTF’) came about in response to two IRA murders (which were, after a few token arrests, brushed under the carpet). However since its inception the PCTF has not carried out one single search, arrest or investigation in relation to the IRA. This is in the context that the PSNI’s own security assessment states that the IRA is still active, and that significant crime is ongoing (such as smuggling).

One would imagine that given the vast financial investigative resources of the PCTF, which includes the NCA as a partner, these tools would be deployed to trace the IRA’s dirty money, laundered into the creation of businesses all across West Belfast and other parts of Northern Ireland. However such a thought is indeed one for the imagination. These tools are reserved solely for the pursuit of persons within loyalist communities.

Incredibly the PSNI do not even seek to hide the inherent imbalance and bias of the PCTF. In written correspondence they confirmed they do not investigate the IRA.

The artificial distinction between ‘paramilitary’ and ‘terrorist’ groups is quite simply a wholly contrived means of the PSNI being able to achieve their desire of putting the IRA beyond the realms of investigation. They have no such issue when it comes to loyalist groups, however this is unsurprising given the necessity of the ‘peace process’ to criminalise loyalism whilst legitimsing republicanism.

Just think on that for a moment; the PCTF have no issue investigating the UVF or UDA who are proscribed under the Terrorism Act (where there is genuine crime by individuals linked to any of those groups then indeed that should be pursued) but they cannot even utter the word IRA once since the ‘crime fighting’ group’s inception. What does that tell you?

In 2020 the PSNI were in an awkward position when it came to the Storey funeral. Faced with the prospect of actually having to take policing action against the republican movement, the PSNI returned to its core objective and instead engaged in a process of shameful collusion with Sinn Fein and the IRA, allowing the streets of West Belfast to be taken over for a republican show of strength, with ‘security’ provided by the Shankill bomber and other terrorist thugs.

The PSNI’s land rovers stayed back, so far back in fact that footage gathered was rendered useless. A helicopter was deemed inappropriate, lest it upset the republican movement.

Of course, when it came to funerals in loyalist areas, there was no such concern for sensitivity. Far be it from desperately seeking to avoid offending loyalists, the PSNI set about actively provoking that community with land rovers planted in the middle of a cortege in one East Belfast funeral, roads blocked and helicopters hovering above.

I remember that day well, and how many normally moderate people eventually realised that we did not have a balanced police service, but rather one which was wholly biased in favour of the nationalist community.

The Storey show of strength sham investigation was comedy at its best. The PSNI ‘negotiated’ with representatives of Sinn Fein and IRA members for six months to arrange a date for interview, and then kindly provided a copy of all evidence weeks in advance of interview.

Shortly after the Storey collusion became clear (after almost a year of seeking to conceal it), Rangers won the league and supporters gathered to celebrate. Within six days the PSNI were banging on doors of those within the loyalist community. Six days for loyalists, six months for the IRA.

Fast forward to peaceful protests against the Protocol; the PSNI had no shortage of land rovers or intelligence gathering apparatus for those events. Inside weeks of peaceful protests the PSNI were sending out letters offering an interview. Rather than the six month time frame allotted for republicans, loyalists got two weeks, and of course no special disclosure regime in advance.

Then in August 2021, we had a republican show of strength in West Belfast at another funeral. Images of the masked gunman saturated social media. Incredibly (even for the PSNI) they issued a statement telling people that we did not see that which was plainly before our eyes. It seemed apparent that all efforts to even conceal the bias subtly had now been abandoned in favour of simply owning the two tier nature of policing. At least this approach is more honest.

A week later, another republican show of strength (it is unclear whether the PSNI will ask us to pretend this one did not happen) took place. Media reports suggest the PSNI were ‘tipped off’ in advance but chose not to act. This would be wholly unsurprising; why would anyone ever expect the PSNI to act in a manner that would upset nationalist communities?

Twenty-two (yes, twenty two) loyalists were arrested over a peaceful protest under the Terrorism Act (no one sensible could ever stand over the proportionality of that), yet you can bet your life there will be nowhere near that number of persons arrested in relation to recent republican guns on the streets.

A short article is insufficient to do justice to just how imbalanced the PSNI is, but some of the examples set out should illuminate the issue sufficiently for present purposes.

If we return to the PSNI’s inception set out at the start of this article. Nationalism had no confidence in the RUC, so the RUC had to go. So, now that the PUL community have no confidence in the PSNI, why should it be allowed to stay and continue operating in the biased and partisan manner it has for two decades?

In the first instance the PSNI need to engage in public debate on their relationship with the PUL community (genuine grassroots engagement answering hard questions, not tea and buns with community gatekeepers) and explain the obvious questions that arise from the increasingly overtly two-tier system of policing.

However, alongside that there must be political action from unionist parties who can not possibly be blind to the two tier nature of policing. If that is so, then why does political unionism continue to prop up the PSNI, rather than demanding- at the very least- significant structural reform?