The Government has again promised to deliver nationalism's key demand of an Irish Language Act by legislating over the head of the Northern Ireland Assembly and the cross community protections in the 1998 Act. Therefore, what is the point of sustaining the institutions? 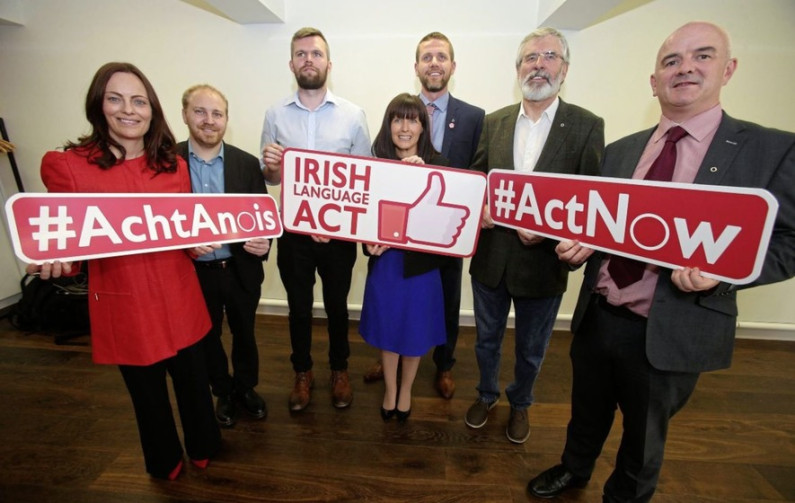 The Irish language has been weaponised by nationalism, therefore whatever about the merits of the argument that the language is ‘owned by all’ (and I don’t subscribe to that argument, I don’t see Irish as part of my identity, but some in unionism do), it must be confronted in the manner it now exists.

Fundamentally, extreme elements of nationalism see the language as a means of greening public services and forcing the language into every area of life in Northern Ireland as another staging post in the insatiable cultural war. To adapt slightly a phrase of the great Justice Scalia- this crocodile comes as a crocodile.

The Irish Language Act has moreover become a touchstone symbolic issue for the unionist community because of the symbolism of nationalism collapsing Government for three years- making a stand-alone Irish Language Act a pre-condition to returning- and once again being rewarded for doing so.

It plays into the belief of a large section of unionism that the entire post-1998 ‘process’ is predicated upon the fundamental ethos that unionism must give, and nationalism must get.

In New Decade New Approach (‘NDNA’) the then DUP leadership capitulated to this key symbolic nationalist demand, supporting a stand-alone Irish Language Act. The dancing on the head of the pin by proponents of NDNA was painful to watch. Some in the DUP argued that NDNA did not deliver a stand along Irish Language Act, despite the fact the draft legislation literally included, in black and white, a stand-alone bill for Irish Language.

Moreover, not only did NDNA promise to deliver a stand-alone Irish Language Act, it envisaged doing so by embedding the legislation within the Northern Ireland Act 1998 (‘the 1998 Act’), a constitutional statute- thus giving it even greater status.

This NDNA fiasco on Irish Language was coupled with the Executive Functions Bill which hollowed out key protections within the 1998 Act (inserted on foot of St Andrews) designed to prevent nationalist solo runs. Despite significant warnings that the ‘cross cutting’ test was being hollowed out, the then DUP leadership ignored even a rebellion within their own party, instead chaperoning the Executive Functions Bill through based on their fundamental misunderstanding of the law.

‘Forgive them, they know not what they do’ would in normal circumstances apply, but that cant be said. They were told clearly exactly what they were doing and chose to ignore even expert opinions on the issue (see, for example, Richard Bullick HERE)

And so, the present DUP leadership have inherited a mess in relation to the Irish Language. Both Edwin Poots and Jeffrey Donaldson knew that they could never ‘sell’ an Irish Language Act to the unionist community. Another symbolic example of how unionism must give, and nationalism must get is intolerable for a community which is now arguably in a vast majority anti-agreement.

After two decades of a one-sided process designed to incrementally hollow out the Union, even the most ardent champions of the Belfast Agreement within the unionist community have been forced to concede it is fundamentally imbalanced.

Those within unionism who supported the Agreement did so primarily based on the premise that the principle of consent protected Northern Ireland’s place within the United Kingdom. The translation of this principle into section 1 (1) of the 1998 Act has been shown to be a deceptive snare. Not even the handing over of lawmaking powers to a foreign power, and repealing the very foundational constitutional statute (the Acts of Union), triggers the apparent consent principle.

It is clear therefore the principle of consent is worthless; you can change everything but the last thing, and when it comes to the last thing- the severing of the last tie- everything has already been dismantled anyway. And that is exactly how the ‘process’ is supposed to be.

The Government in NDNA ‘charitably’ made a commitment to legislate to protect the UK Internal Market (it is trite to point out that requires legislation to restore Article 6 of the Acts of Union). That is the ‘concession’ for unionism- our own Government will ensure (so they said) that one of the cornerstones of the Union would be protected.

Where else in the world would citizens of a sovereign nation be expected to be grateful that their own Government would make a promise to uphold their sovereign status in their own country? Yet that is the bizarre position unionism is in.

I need not point out that far be it from the Government following through on this grand commitment to unionism in NDNA, it in fact did the opposite. Rather than protecting Northern Ireland’s place in the United Kingdom internal market (which is as a matter of law Article 6 of the Acts of Union), the Government went to court and argued that Article 6 had been subject to implied repeal in order to facilitate the Union-dismantling Protocol.

However in contrast when it comes to nationalism’s key demand, the Government are falling over themselves to once again feed the concession meter. The Government who wax lyrical about respecting the Belfast Agreement, will- when the nationalist dog whistle echoes around the corridors of Downing Street- come running like an obedient lapdog and legislate over the head of the Assembly (and the in-built ‘key’ provisions for cross-community consent).

If the DUP tolerate this latest capitulation to nationalist demands (leveraged via three years of collapsing the institutions), then what is the point of the DUP if they do not even act as a bulwark against the advancement of the ‘process’ of changing everything but the last thing?

To tolerate this latest humiliation, which involves the weaponisation of the Belfast Agreement into a nationalist document- to be read and interpreted in line with nationalism’s reading of its provisions- would be to send the message that there is nothing that unionism will not tolerate.

Why should the Government not continue to simply read the Belfast Agreement as a nationalist text and consistently bend over backwards for nationalism?

The only way to turn the tide is for unionism- for once- to deliver consequences. To send a clear message that after two decades the message is now enough is enough!

A forced Irish Language Act would be enough to warrant the collapsing of the institutions (which are pointless because they only exist to facilitate nationalism) in of itself; but in the context of ongoing failure to remedy the constitutional vandalism perpetrated by the Protocol, the situation is intolerable.

This ‘process’, and the institutions that flow from it, is rotten to the core. The continued participation of unionism is an act of self-harm.

This requires (i) strengthening the principle of consent to protect the substance of the union rather than the symbolism; (ii) restoring the Acts of Union; and (iii) ending the ‘process’ of perpetual concessions to nationalism designed to hollow out every vestige of British identity and sovereignty within this part of the United Kingdom.

The question to the DUP is simple; if not now, when?