A unnotified public procession by republican group Relatives for Justice has yet to be investigated by the PSNI, which stands in stark contrast to the relentless pursuit of the PUL community for peaceful protests. 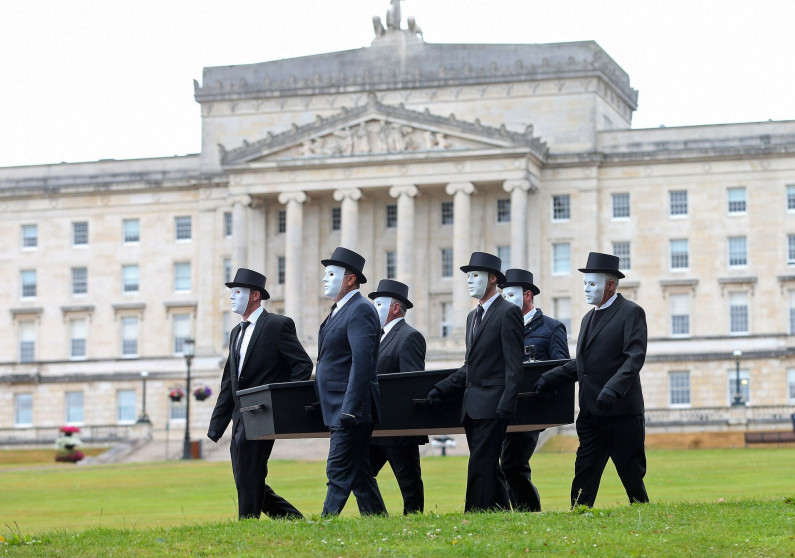 The lack of investigation into a procession held by republican group Relatives for Justice on 29 July 2021, when viewed in the light of the PSNI desperation to pursue peaceful loyalist protests, illuminates another example of two-tier policing.

A group of republicans gathered in fancy dress at Stormont on 29 July 2021, armed with a wooden box, and claimed they were having a procession to “lay the remains of justice at the door of the NIO”.

Notwithstanding that it is patently obvious the gathering constituted a procession within the meaning of the Public Processions (Northern Ireland) Act 1998, helpfully nationalist councillor Matt Collins set out the procession in a tweet:

There is of course an exemption at section 6 (5) (a) of the Public Processions (Northern Ireland) Act 1998 for a “funeral procession”. However, common sense would tell you this applies to an actual funeral, not a group of republicans in fancy dress carrying a box claiming it represents the death of ‘justice’. #

For present purposes we need not dilate on Relatives for Justice, a group who has in past advertised IRA terror commemorations, having the audacity to preach to anyone about justice.

However, if the PSNI position is that ‘pretend’ funerals suffice for the exemption within section 6 (5) (a) of the 1998 Act, then simply applying the same logic there is nothing to prevent a band painting a wooden box, labelling it the death of justice for Protestants in NI, and heading on up the Garvaghy Road or Crumlin Road.

If it is good enough for republicans to have a pretend funeral and thus evade the Public Processions (NI) Act 1998, then so too is it good enough for the PUL community to circumvent the 1998 Act in the same way.

The PSNI, unsurprisingly given their inherent pro-nationalist bias, have not (thus far) commenced an investigation into this unnotified public procession. However, correspondence has now issued (under cover of a response relating to another investigation) on 3 August 2021 which formally raises the matter with the PSNI as a complaint.

It is trite to point out that a “procession” does not require music instruments or bands. The persecuted flag protestors bear the scars of that particular argument on our back.

Accordingly, there are only three possibilities:

(i) PSNI say this procession was within the exception within section 6 (5) (a) of the 1998 Act and was a “funeral” (laughable as that is, do not rule out the PSNI seeking to deploy it) or;

(ii) the exemption does not apply and therefore it was an unnotified public procession.

If (i), then fabulous. It is open season and every band parade the Parades Commission would seek to restrict needs to simply carry a pretend coffin, copying the Relatives for Justice approach, and circumvent the 1998 Act accordingly.

If (ii), then one would expect a swift and expedious PSNI investigation and a file submitted to the PPS.

However, if the PSNI conjure up a (iii), namely “immunity for republicans again”, then this will raise serious issues as to why the law is applied in one way for peaceful loyalist protests, and another way for republican protests.