A temporary garden of remembrance was erected by the Greater Shankill ACT initiative, in a dignified tribute to those who the group say "dedicated their lives to fighting republicanism". 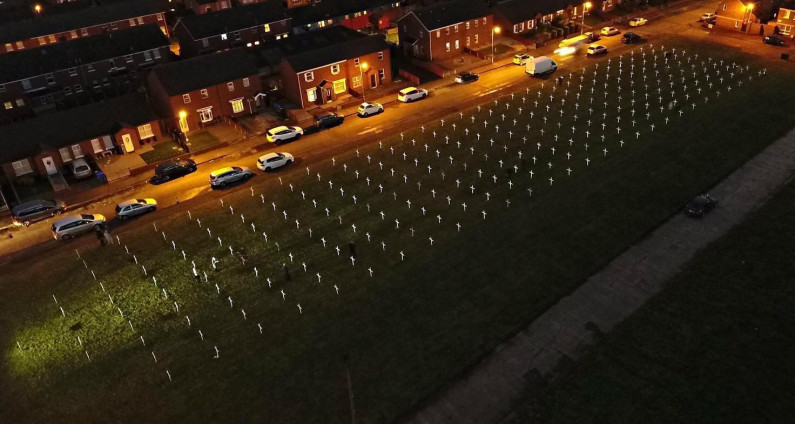 The Greater Shankill ACT initiative has paid tribute to the men they say “dedicated their lives to fighting republicanism”. The tribute came as they unveiled a temporary garden of remembrance at Lawnbrook Avenue in Belfast’s Shankill area.

The display paid tribute to combatants who had engaged in the more recent armed conflict, and despite predictable criticism from across pan-nationalism, ACT spokesperson Steven Pollock stood by the tribute- which was immensely popular in the local community. He told Unionist Voice;

“We decided this year that we would try to deliver a very poignant act of remembrance. In the entirely unbalanced prevailing legacy narrative it appears that republicans are entitled to remember their dead, but that loyalists are meant to hide away in the corner.

He continued “Many of those whose sacrifice is represented by the crosses suffered, and endured great hardship as part of their contribution to fighting the terrorist onslaught of the IRA. They are men and women who did not want to get involved in any form of conflict, but felt they were left with no choice but to defend their community.”

In response to a predictable online onslaught and criticism from pan-nationalist activists Mr Pollock highlighted the respectful nature of the tribute, saying “this was not some glorification of the brutal events of our recent conflict, but rather an opportunity for loyalism to pay tribute to those that defended our community. Loyalists corporately in 1994 expressed abject and true remorse to all innocent victims. That does not mean that we as a community are not proud of the men, and women, who dedicated their lives to fighting republicanism”.

Explaining the memorial, a statement from the Greater Shankill ACT Initiative said “The garden contains hundreds of large white crosses, each carrying the name of a deceased volunteer. The memorial will remain for a short period of time; thereafter the crosses will be removed and presented to family members of the deceased.

“We feel it is crucially important, as part of our commitment to positive transition, that former UVF combatants and the families of deceased volunteers are not left behind, that their memories are not tarnished as part of a carefully co-ordinated attempt to re-write history and most crucially of all that their motivation for engaging in the conflict, namely the defence of our community, is not misrepresented.

“We are proud of this dignified project of remembrance and hope that it has in some small way provided comfort to the friends and families of the deceased, allowing them to remember their loved ones and also seeing that their community has not, and will not, forget their sacrifice.”

The temporary memorial was visited by hundreds of people in recent days and has been widely praised.