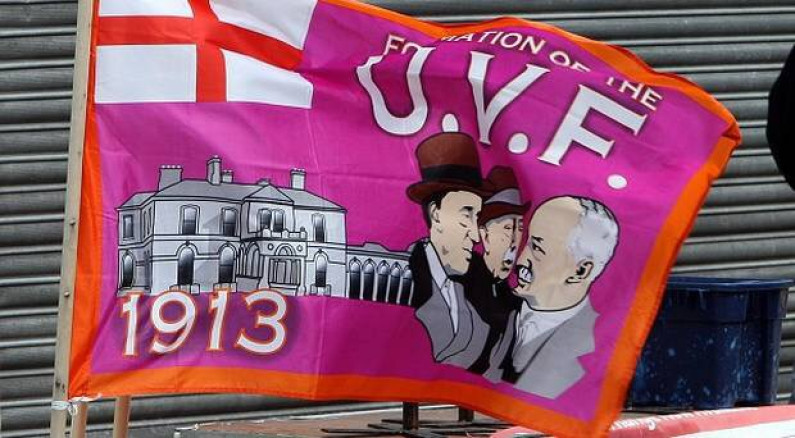 Protocol presented by the East Belfast Community Initiative which mediates on behalf of ex combatants linked to east Belfast UVF.
• Flags to be erected on 1st June and removed as soon as practicable following 28th September (Ulster Day) but no later than 7 October.

• Tattered, torn or otherwise damaged flags to be removed and/or replaced at the earliest opportunity.

• Only legal flags to be erected on public lamposts.

• Flags, kept in good condition, to be flown 365 days a year from memorials, murals or other areas of commemoration.

The East Belfast Community Initiative has obtained agreement from associated loyalist communities in the east Belfast, North Down and Newtownards area to implement a positive cultural expression protocol in relation to the flying of flags for the year 2018.

All of those involved in discussions have reaffirmed their commitment to adherence to the rule of law, and the protection of long standing cultural traditions.

Accordingly groups associated with the EBCI have agreed to fly only legal flags, and this is defined as those flags which would not fall under the provisions of the Terrorism Act 2006 in relation to inviting support for a proscribed organisation.

The groups have further agreed that torn or otherwise damaged flags will be removed or replaced at the earliest possible opportunity.

All flags will be removed as soon as practicable following Ulster Day (28th September) but no later than 7 October.

The protocol will take effect at mid-night on 22 May 2018, and will not apply retrospectively.

A spokesperson for the EBCI said

“This is an extremely positive step by the groups, who have agreed to self regulate to ensure that our culture is displayed in the best possible manner.

“We are not blind to the contrived attempts by groups fronted up by arms length Sinn Fein activists to make every aspect of unionist culture contentious.

“The EBCI will always engage positively in any discussions that will further our objective of protecting unionist cultural expression, and it is our firm belief that this protocol provides the framework for advancing that objective.

“We are proud of the sacrifice of our community throughout Two World Wars and numerous other conflicts and we specifically remember with pride the Ulster Volunteer Force 1912 and 36th Ulster Division which sacrificed so much to ensure the freedom and British way of life that we enjoy today.

“We reaffirm our commitment to the rule of law, and it is in this context that we have obtained voluntary agreement that only legal flags will be erected by those loyalists associated with EBCI.

“We would hope that this commitment will be widely welcomed and we look forward to a peaceful summer of positive cultural celebration.”