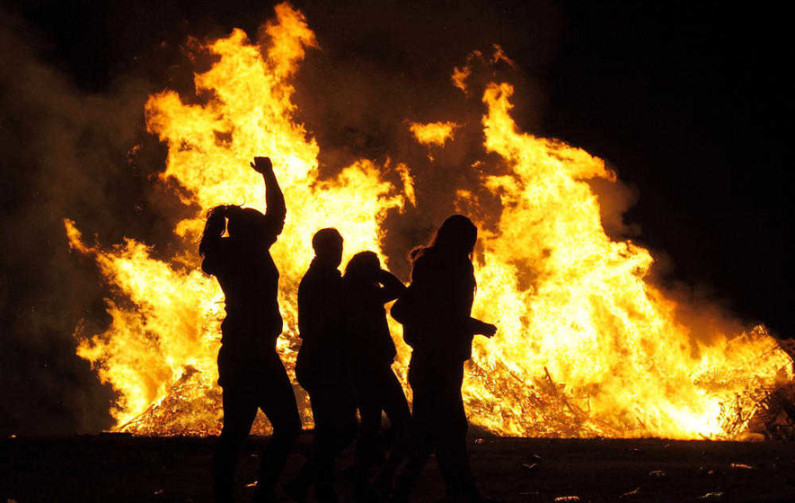 The publication of four images relating to the Avoniel bonfire has, quite rightly, caused considerable anger amongst the grassroots unionist/loyalist community.

The majority of people naturally look to events such as the New Lodge in August 2019 and wonder why there are no similar PSNI media releases of images?

This plays into the widely accepted narrative that there is a two-tier policing system, which seeks to criminalise and dehumanise every aspect of PUL culture and identity, whilst normalising and legitimising the republican community, and their legacy of terrorism.

Two tier policing is a subject well-rehearsed on this website, and there are many challenges for policing in that regard, however this article will instead focus on the current specific issue.

Of course, we must also be mindful of the salient point that there is, in fact, no comparison between peaceful unionist cultural celebrations such as Avoniel, and anti-social behaviour fests such as republican bonfires which have no significant cultural or traditional linkage.

The release of the images, authorised in the name of Detective Inspector Mary White, led to the wide dissemination of four images of persons who were, at that time, unknown to the PSNI. At least three of the images were of young people, and given they were- by the PSNI’s own admission- unknown to them, there is no way the PSNI could have known the age of each of young people.

Therefore, what steps were taken to ascertain whether the PSNI were publishing images of children? If it so transpires that any of the young people are under 18, then how do the PSNI propose they could rectify the damage done to children who have now been plastered all over the mainstream media?

We then turn to the proportionality of publishing such images. The alleged offence is one of ‘trespass’, so minor a criminal issue- and arguably more appropriately dealt with as a civil matter- that the PSNI would not even have powers of entry under the Police and Criminal Evidence (NI) Order 1989 to make an arrest of a person suspected of trespassing.

How did the PSNI arrive at designating a summary only offence, based upon a dubious complaint from a politically motivated council, as one so serious that it was felt proportionate to circulate images to the mainstream media in a manner so prejudicial to the rights of the suspects that it is hard to fathom how any of those later identified could receive a fair trial.

I would be extremely interested to know who the actual complainant will be in this case- presumably it is Belfast City Council corporately- and as such who has the legal authority to make the complaint corporately on behalf of the council, and which processes have been followed in the granting of such authorisation?

In one article- spawned by the PSNI’s latest media stunt- BBC NI even leapfrogged the PSNI’s own statement and went one better, stating that the persons identified were sought in relation to ‘disorder’. There was absolutely no disorder whatsoever, rather the BBC NI newsroom followed their now traditional practice of reporting the news as they wish it would be, rather than as it is.

The PSNI also sought, bizarrely, to retain some kind of control of what happened to the images once they initially circulated them. They were not to be used after anyone had been arrested apparently (it is unclear how anyone would be interviewed on anything other than a voluntary basis given the nature of the ‘offence’). Yet this, predictably for anyone with a modicum of understanding of social media, backfired with the images now circulated widely- with online threats made towards the persons- and even after the PSNI had removed three of the images, they still found their way into today’s newspapers.

There is a clear political effort to set a precedent for ‘trespass’ in this case, in order for Belfast City Council, and other nationalist dominated councils, to open up a new front in their war on PUL culture. This is a destructive agenda, and one which will never lead to positive outcomes.

In the eyes of many the traditional street bonfires have been corralled into main bonfires in each area and rather than embracing the financial savings made by such a move, the statutory agencies and political opponents of PUL identity have instead sought to ‘kettle culture’ and slowly tighten the noose, seeking to squeeze every last breath out of cultural expression.

They may think this is a clever strategy; as a unionist I don’t really object, because all they will achieve is they will build so much resentment that the corralled will break free and we will return to community bonfires on every street corner which will be impossible to police, easy to build and even if dismantled, quick to replace.

In relation to the current state of play, it would be absurd to expect the PSNI senior management to publicly row back from their latest misconceived media stunt, as doing so would be effectively career ending for the officer who put her name to the decision on the public statement; however privately the PSNI must surely review this latest debacle and undertake some learning of their own about how such incidents further lead to resentment of policing from within one community, and indeed beyond that the proportionality and wisdom of publishing images relating to such minor offences in any circumstance. Was there, for example, a community impact statement before these steps were taken?

PSNI, at a senior level, engaged with loyalists around Avoniel and on other contentious issues last year and the engagement was widely welcomed within loyalism as constructive and positive. There was a clear willingness to keep positive channels of communication open for the betterment of the community.

However those channels were shut down by the PSNI on the 13th July, indeed worse than that the PSNI- at a senior level- went on a clear propaganda initiative against the very same people they had worked so constructively with to ensure a peaceful resolution to the Avoniel bonfire, and other contentious issues.

How does that square with ‘policing with the community’, or building the kind of relationships the PSNI tell us they want to be at the heart of policing?

We have seen the Chief Constable sit happily with Spike Murray and other senior republicans, yet the PSNI would recoil from any such public engagement with loyalists. Why?

This brings us full circle to the challenges around transition and how republicans are being normalised and legitimised, whilst loyalism is being criminalised. The PSNI, like other statutory agencies, must be brave enough to have challenging and difficult conversations with those sections of loyalism who have genuine concerns about policing.

There are also challenges for loyalists in those discussions, but it is a two way street and often- such as with the positive 2019 engagement around Avoniel- it is loyalism who is willing to act constructively and the PSNI and statutory agencies who pull away from difficult dialogue, preferring instead to restricting their engagement to approved ‘process’ gatekeepers.

East Belfast Cultural Collective, and specifically bonfire builders associated with Avoniel, publicly called for dialogue with all political parties and statutory agencies, and made clear they were prepared to talk with anyone in order to deliver positive solutions. In any event positive solutions were delivered without the assistance of political parties, but by a grassroots unionist/loyalist movement which came together to defy the latest efforts to strip away PUL culture.

The only party who has positively engaged with the group locally is the DUP. All others have refused the invitation issued in July 2019, and yet it will be the same people come the summer who will be urging solutions.

Loyalism cannot, and will not, be used for one month a year to try and deliver positive solutions, and then cast aside for the rest of the year and dehumanised and criminalised. The opportunity for positive, but difficult, dialogue is there but it is up to the PSNI and statutory agencies to embrace the spirit of constructive working, rather than deliberately seeking to frustrate it.