It is just over one week since the detail of the Betrayal Act became public. It has sparked an organic movement of grassroots unionist/loyalist resistance. The message is clear; enough is enough. 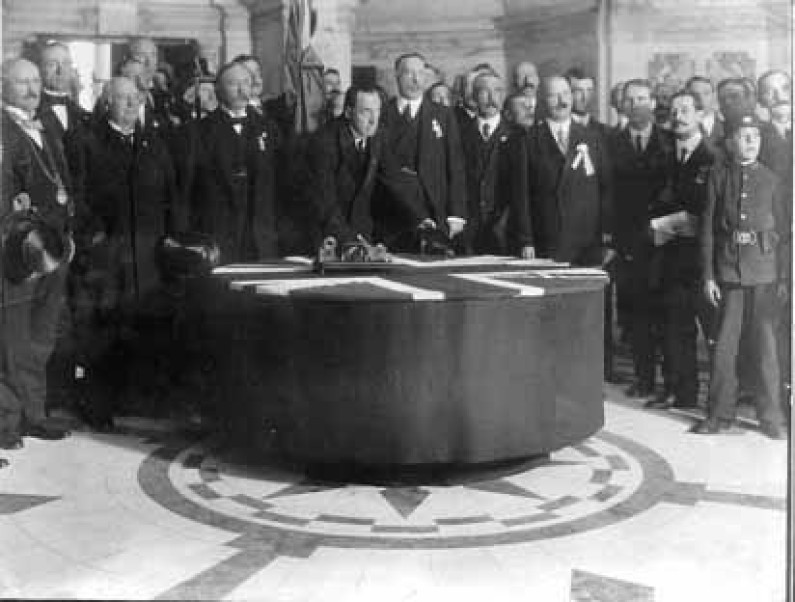 This website spent many months warning that there was a growing anger within loyalism. The liberal elite establishment- whose window into loyalism comes from those who have made a career out of the ‘peace process’- poured scorn on such warnings. Their contacts told them all was fine, indeed even some suggested that a border in the Irish Sea was “not a deal breaker for loyalism”. How misguided such analysis was and is.

Let us be clear; there is no one within loyalism itching to engage in violence. I have not heard a single person saying that is the direction they hope events would travel. Who in the right mind would want to see violent conflict?

That is not the issue, the issue is that loyalism is unwillingly being pushed incrementally in that direction by the aggressive assault on the union in the form of this Betrayal Act, and indeed the relentlessly pro-Irish direction of the ‘peace process’.

When the nationalist community felt entirely disengaged from the political process and as if they were being treated like second class citizens, they responded by taking the streets. Look how that ended up for the next 30 years.

In 1998 the grassroots unionist and loyalist community in many respects became de-politicised, simply because the agreement was sold as a settlement. It was believed that the union was safe; the core objective was achieved and as such there was no political campaign to wage.

Nationalism on the other hand only ever saw the process as precisely that; a process beginning with the concessions achieved in 1998, the end point of which is Irish unity. That community became politicised.

Because of this the loyalist community drifted aimlessly into community development, cross community peace-building and other kinds of grassroots transitioning from armed conflict to peace. This kind of engagement was not conducive to political activism, because its very purpose was to foster unionist-nationalist consensus. Indeed in order for the funding to flow, there had to be at least some effort to build consensus.

That is all well and good, but simultaneously the nationalist community were waging an all out political war to advance their objectives. The grassroots development work was only one-tier of their strategy, a means to tie loyalists into their web and nudge those trapped towards acceptance of the trajectory of the ‘process’. Loyalists didn’t have the overarching political activism, and therefore became trapped in the consensus building world of peace-building and conflict transformation.

Therefore it was from within that peace-building world that the establishment got their sounding boards, and concluded that all was well. Perhaps some may have even concluded that any kind of betrayal could be inflicted upon loyalists, so long as the pot was sweetened with funding. A serious error of judgement.

The building anger within the grassroots unionist/loyalist community exploded over the past week. All of the anger and frustration with the one-sided peace process rumbled together into a perfect storm, given a focus by the Betrayal Act which was designed to drive Northern Ireland into an economic United Ireland.

That this concession to nationalists was a reward for three years of warning that peace will be under threat from republicans if they do not get their own way, particularly enraged many within the loyalist community.

However it gets worse. The Belfast Agreement, the holy writ pan-nationalism had clung to, was then sacrificed on the altar of their political objectives. The cross-community consent mechanism for key decisions, enshrined within Strand 1 (5) (d) of the Belfast Agreement, was a cornerstone, or so we were told.

Nationalism consistently made clear they would never return to majority rule, until of course the opportunity presented itself for nationalist majority rule in the form of a mechanism that would allow them to drive us into an economic United Ireland. At that point the Belfast Agreement was happily cast aside.

Those within unionism that consistently promoted the Belfast Agreement and facilitated the harmonisation agenda cannot say they weren’t warned. Nationalists do not want to share power, they want to use power-sharing as a transition to dominating power. They do not want equality, they want supremacy. All the honeyed words in the world should never have been enough to fool unionism into believing otherwise.

They did not however factor in grassroots loyalism. That mass movement which has slept quietly and been largely disengaged from politics over the past 20 years. It has awoken. Anyone in the east Belfast Con Club last Monday night will testify to the fact that the winds of change are blowing, and as they howl around every unionist town and village, a sleeping giant is beginning to stir.

That genie is out of the bottle, and it is beyond anyone’s control. The establishment’s favoured security correspondents from the 1990’s- who sometimes seem to be more interested in auditioning for the role of ‘truth commissioner’- and the academics who have made a career out of exhausting the linguistic playbook of peace process buzzwords, are behind the curve. Like the elite in London who can’t understand Brexit, these people don’t understand loyalism in 2019 and therefore they can’t see what is happening.

The stirring movement across loyalism isn’t orchestrated, nor does it emanate from any one person or group. It is organic in every sense of the word, and more importantly it is empowering. This energy fizzing across the loyalist community is encouraging people to find their voices, to step forward and to proclaim their commitment to resisting the Betrayal Act. There is a desire to get politically active, to do something.

There is a consensus, and it is very simple. The one-sided peace process has delivered nothing for the grassroots unionist and loyalist community, and we have had enough of it. That shouldn’t be confused with opposing peace; no one is occupying that ground within loyalism. But the current process can not proceed any further; it is unbalanced, it is riddled with concession after concession to nationalism and it is designed to drive us into a United Ireland, the economic phase of which pushes us onto the window ledge of the union.

Public meetings are organically being organised across towns and villages in Northern Ireland. Those meetings belong to the people, and the purpose of last week’s meeting in the Con Club was to encourage all of the unionist/loyalist community in every area to become active. It is up to every single unionist/loyalist to get involved and to do whatever can be done in your area to resist the Betrayal Act.

This resistance to the Betrayal Act belongs to no person, to no group. It is a movement of the people fuelled by the energy of every person that participates. There are no leaders, and there are no followers. There is just unionists and loyalists all standing side by side with a very simple message; we are never tolerating an economic United Ireland.