ANALYSIS: The PSNI timeline exposing their collusion with republicans in advance of facilitating IRA Storey funeral

The entirely predictable political decision not to prosecute anyone for the blatant breaches of the criminal law at the IRA funeral of Bobby Storey came as no surprise to those of us who have been challenging the two-tier policing and justice system throughout the past decade. 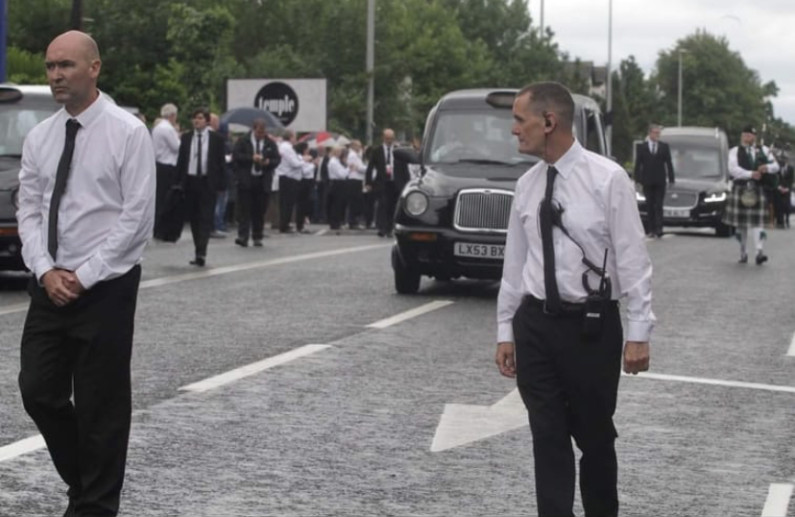 The Director of Public Prosecutions (‘DPP’) issued an extensive statement seeking to explain his perverse and politically motivated decision to effectively grant blanket immunity to all those who participated in the IRA show of strength at the funeral of Bobby Storey.

Naturally when it came to a family funeral in East Belfast, the PPS announced they were offering informed warnings, which if aren’t accepted will proceed to court. The disparity is overt, blatant and plainly rooted in the political bias inherent within the entire policing and justice system post-1998.

It is notable that only 24 persons were interviewed (albeit almost six months later after the PSNI ‘negotiated’ a voluntary attendance with the republican movement). None of those lining the streets in organised fashion and in identical white shirts and black ties were even interviewed. Whilst it is again unsurprising that the PSNI would fail to show any commitment to pursuing breaches of the law when it involves republicans, it is nevertheless illuminating as to the overt nature of the two tier system of policing.

The DPP statement began within the introductory portions with a laudable reminder that equality under the law was a “cornerstone of a democratic society”. Things went downhill from there. The remainder of the statement was devoted to a convoluted and bizarre bending of logic and law in order to arrive at the pre-determined political outcome.

The DPP takes us on a long and winding journey around the various amendments and provisions of the dogs dinner that are the ‘Covid Regulations’.

There are two limbs to the PPS’s faulty reasoning. If we assess each in turn:

The PPS appear to effectively run an ECHR Article 7 defence on behalf of the suspects, but avoid actually referring to that Human Rights provision, and instead essentially build a defence which is effectively that the legislation was unforeseeable as to its consequences due its vague, ever-changing and ambiguous nature. The PPS seeks to avoid explicitly declaring that the Regulations were not Article 7 requirement, as if they had to explicitly do so they would to all intents and purposes torpedo any prosecutions under the Regulations. Notably the floodgates would also open for unlawful detention for anyone detained under the Regulations and/or issued with fixed penalties.

Interestingly, in the PPS’s account of the various defences offered by suspects- all of whom who were elected representatives- this is precisely the defence adopted by some. The logic of that defence is entirely circular- those who made the Regulations argue that those same Regulations are vague and confusing. It is entirely perverse, and the PPS has had to perform intellectual backflips in order to mould this ridiculous contention- from the very people whose job was to make the Regulations- into a reason for not prosecuting any members of the republican movement.

We then turn to the most absurd contention of all; which effectively upends the settled and established legal principle that ignorance of the law is no defence. In seems it now is. The PPS tie the ‘reasonable excuse’ to the collusion between the PSNI and representatives of the IRA prior to the funeral of Bobby Storey. This comical suggestion is made even more untenable by the reality by the PPS’s own admission, some of the accused adopted the position of stating they had no knowledge of this collusion prior to the funeral, thus undermining the core plank of the defence the PPS kindly built for them.

It is however within the ambit of the PSNI’s collusion that the most shocking material has now surfaced within the timeline provided within the PPS report issued today (30 March 2021).

(i) Police were aware, no later than 23 June 2020, that the senior Sinn Fein official who engaged with police in relation to the arrangements for the funeral intended to attend himself.

The PSNI have a statutory duty under Section 32 (1) (c) to prevent the commission of offences. Upon becoming aware of this proposed breach of the law, the PSNI did not seek to enforce the law and prevent the crime, rather they continued to engage with the proposed law breaker.

(ii) By 24 June 2020 police were aware that Sinn Fein were preparing a management plan for the funeral and police intended to complement the plan in terms of public safety and traffic management. It was intended that there would be a “no surprises” approach.

Incredibly the PSNI sough to “complement” Sinn Fein’s plan. The policing of a large scale (unlawful) public event was entirely surrendered to the republican movement, with the PSNI merely ‘complementing’ this ‘plan’.

(iii) By 25 June 2020 police understood that the maximum occupancy within the church would be 30 persons (strictly limited to family only), but that this was subject to change with any amendments to the 2020 Regulations.

(iv) By 26 June 2020 it was understood that the funeral would be a high profile event that would be attended by a range of senior republican figures and would attract significant media interest. The PSNI Gold Strategy made reference to the functions of police and the need to “facilitate the funeral arrangements … in a dignified manner which takes into account the wishes of the family, is sensitive to his community and which does not significantly compromise public health in the current pandemic situation.”

Clearly the ‘Gold Command’ in referring to the PSNI’s functions must have forgot to actually read Section 32 of the Police (NI) Act 2000. Far from discharging their policing functions, the PSNI effectively adopted a new role- namely “facilitating” the law breaking to ensure that it took place in a “dignified manner”. What next- “please Sir when you rob that house could you take off your shoes at the front door out of respect for the home owners freshly cleaned carpet”.

(v) Also on 26 June 2020 police requested a meeting with the lead Sinn Fein organiser in order to ensure “a good mutual understanding of the plan from both perspectives and how we [PSNI] can support and ensure consistent messaging”. By that date police were aware also that Sinn Fein intended to put in place a comprehensive stewarding plan that would promote social distancing and the free flow of traffic; but were concerned about public safety and requested police assistance in conducting searches on the grounds that all of the senior Sinn Fein leadership would be attending the funeral. The request for searches was agreed.

Incredibly (v) reveals that the PSNI effectively adopted an approach of jointly policing the event with the IRA. There was also collusion to ensure “consistent messaging”. In short, discussions on how the republican movement and the PSNI could best conceal the pending law breaking. We also see from (v) that the stewarding and management of traffic was entirely subcontracted to republicans; this even extended to the republican movement directing the PSNI to conduct searches.

The reasoning of the PPS is based not in law, but rather in the post-1998 necessity to ensure that the policing and justice apparatus is entirely subservient to the overriding need to appease and placate republicanism.