"We are one big family and I am delighted we will be spending Christmas Day together" declared East Belfast FC manager Stephen Matthews as he saw his side book a place in the showpiece Steele and Sons Cup final on Christmas day. 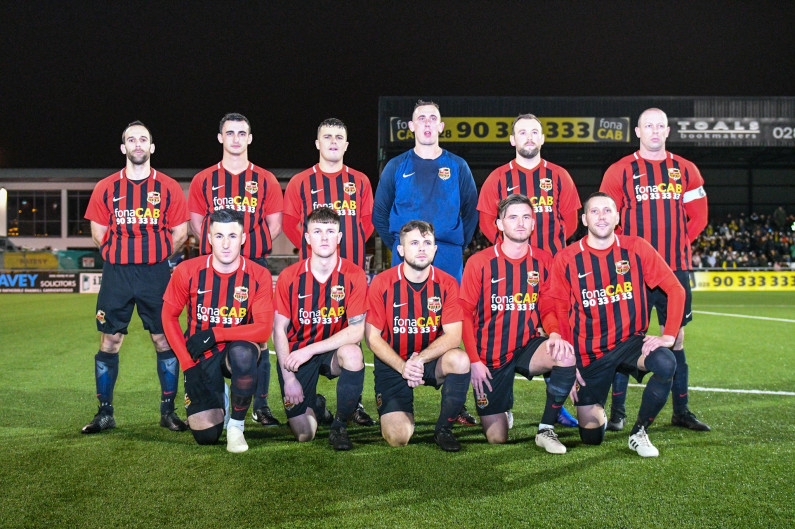 East Belfast FC progressed to the Steele and Sons Cup final after a historic victory at Seaview last night. A Danny McKee goal late in the game was enough to see Stephen Matthew’s NAFL Premier Division side book their place in the showpiece final on Christmas Day.

On a cold night at Seaview over 1,000 East Belfast supporters packed the famous ground for a hotly contested Steele and Sons Cup semi-final against high flying St James Swifts. The West Belfast side brought with them their own large support which made for a red hot atmosphere from the first whistle.

On the pitch there was little to separate the teams with McKee going closest for East Belfast midway through the first half. A similar chance fell to St James Swifts mid-way through the second half, and only for a valiant goal line clearance by the dependable Mark Roy, the West Belfast team would have taken the lead.

As the game progressed into the final quarter it was East Belfast that looked the more likely with Gary Irwin and Sam McNaul winning many plaudits for their outstanding performance in East Belfast’s midfield.

As the clock ticked towards the 90th minute it was East Belfast that took the lead, breaking down the right hand side the ball fell to Danny McKee who calmly slotted the ball into the far corner of the St James’ net sending the 1,000 strong contingent of East Belfast supporters wild.

It felt like an eternity for East Belfast players and management as the final 7 minutes of the clock ticked down, but after 4 minutes of stoppage time the final whistle sounded and with it came confirmation that Stephen Matthews, who had taken over the reins of the club following their relegation from 1A and had since delivered 2 promotions and a Border Cup win, had now taken his team to a historic Christmas Day final to face Sirocco Works in an all-East Belfast tie.

Speaking to Unionist Voice after the game Stephen Matthews spoke of his pride in his players and expressed gratitude to all the supporters that had turned up to cheer on his team. He said “I am incredibly proud of all my players tonight and also each and every player that has played a part throughout the competition to help get us to the final. I would also pay tribute to my assistants and all the backroom staff who have been fantastic.”

He continued “I also want to thank our supporters, they were absolutely incredible. For an Amateur League side to bring such fantastic support is a testament to the strong community spirit that underpins our club. We are one big family and I am delighted we will be spending Christmas Day together.”

Asked about the atmosphere inside the ground and some negative commentary that had been expressed on social media, the East Belfast manager emphasised that his focus was solely on the football and preparing his team for the Christmas Day showpiece. Mr Matthews said “I am a football manager and my focus is always on the match and trying to get the best result we possibly can. My responsibility is for the squad of players I select to try and win trophies for this football club.

He finished by adding “As I have said I am extremely proud of the players and appreciate the support we as a football club received. I look forward to Christmas Day and hope it is a fantastic occasion in which players, supporters and everyone associated with the club showcases the very best of our footballing family in such a prestigious event.”

The East Belfast hero and Toals Man of The Match on the night was Bangor man Danny McKee, the former Glentoran and Ards FC striker. He told Unionist Voice “to get to the Steele and Sons Cup final is an unbelievable feeling and a brilliant achievement for the club. All of the players are still buzzing, the support we had was immense for 90 minutes and the welcome we received back in East Belfast was just amazing for us all. We really appreciated it.”

The Bangor man reserved a special word of praise for the manager who he declares has got him scoring goals again. He said “Mackers (Stephen Matthews) is special, there is not many managers about like him. The way he believes in the players and the support he gives the players is second to none. All the players adore the big man and we know how much last night meant to him. Most importantly, he has got me scoring goals again.”

All eyes now turn to the big game on Christmas Day as East Belfast FC and Sirocco Works go head to head to see who will lift the 2018 Toals Steele and Sons Cup.

Note: This article and the interviews contained within has been published by Unionist Voice. If any other outlets wish to lift any of the material then credit should be given to Unionist Voice.