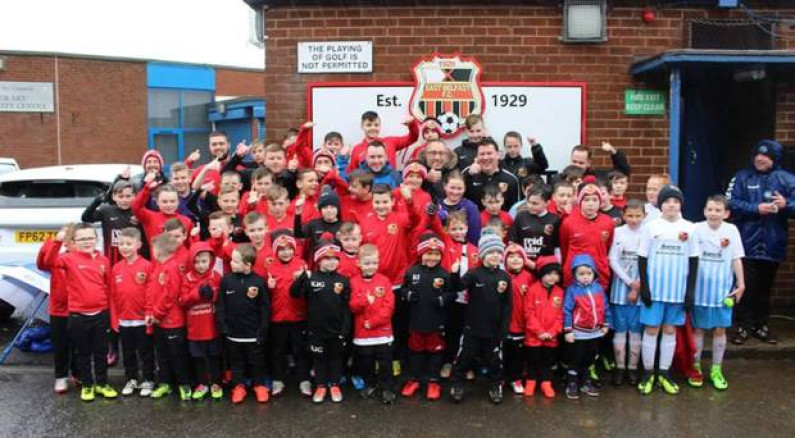 East Belfast FC left furious by council attempts to leave their club “penniless” and stifle exciting plans for the development of a cross community social hub.

East Belfast Football Club have been refused permission for an exciting cross community hub at their east Belfast ground. At a meeting of Belfast City Council’s people and communities committee on Tuesday night the positive proposal was rejected by the SDLP, Alliance party and Green Councillors.

The portacabin, designed to facilitate cross community engagement, community based information evenings on sports nutrition and mental health as well as providing free sandwiches and tea to elderly supporters of the club, was delivered to the ground last week by club sponsors the Parr group.

East Belfast FC sources told Unionist Voice they had sought to follow the correct processes in relation to obtaining permission for the exciting new cross community hub, but sadly conflicting advice from council officers left the club in limbo. The fantastic project is how on hold until the council can re-consider the proposal, in possession of more factual information, at their September meeting.

East Belfast FC are also being pursued by the council, who have demanded an extortionate £2,500 from the club for hosting cross community children’s football small sided games on waste land which the club developed at their own cost.

Parents have reacted furiously to the news and the club has been forced to hold back potential investment in the children’s development section due to fears that the council may try and leave the club penniless.

“I am furious. My son’s life revolves around East Belfast FC, he has met new friends from differing traditions and it has been fantastic for him. He suffers from autism and this is the first time he has engaged. These council officers are just nasty, they want to take every penny our wee club has.”

It is understood that the council have tried to retrospectively bill the club for use of waste land that the club developed at their own cost into a small sided games area. East Belfast FC have also recently completed a project that was hailed as “fantastic” by local politicians, when a longstanding Ulster Volunteer Force (UVF) mural was re-imaged and replaced with a tribute to football stars from the east of the City.

A spokesperson for East Belfast FC refused to be drawn on the specifics of the dispute, telling Unionist Voice that their priority was advancing the cross community development of their club, community and specifically the young players and made clear they did not want to get “bogged down” in disputes that they claim have been “engineered by rogue council officers”.

A statement publicly released by the club onto their Facebook raised concerns that Belfast City Council staff may be briefing the mainstream media in an attempt to increase controversy around the issue and further disadvantage the hugely successful and community based club.

A spokesperson said; “We feel, and this is also the view of local councillors, that particular council officers have been attempting to make things extremely difficult for our club.”

The spokesperson continued to say “we would be somewhat concerned if council ‘sources’ had been trying to use the media to up the ante in relation to this matter.”