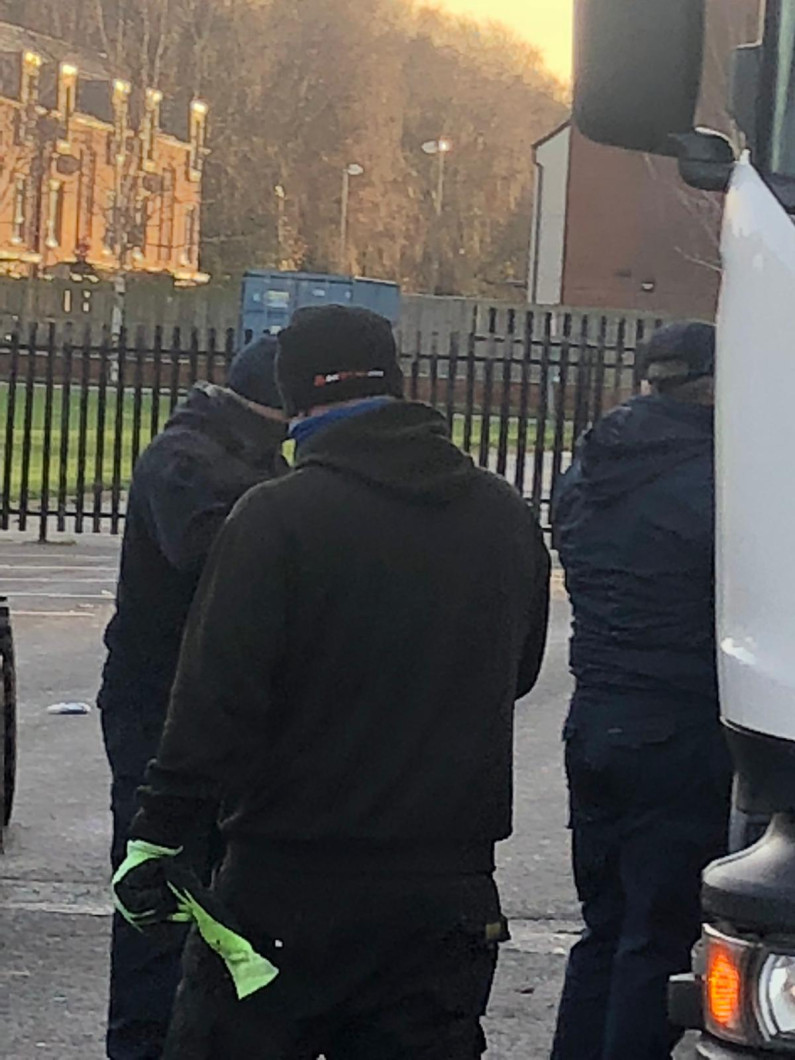 East Belfast Football Club have released a statement in the wake of last weeks invasion of their football club by masked men. The statement calls on unionist elected representatives to indicate their support for a political declaration which slams the actions of Belfast City Council, reaffirms that no unionist political representatives were consulted about the plans to send in masked contractors and further commits to support the club going forward.

It comes after the club held a series of meetings with unionist political representatives over the past week. A source close to the club said that the political declaration of support was crucial. They told Unionist Voice “the unionist people of East Belfast have been let down by this council again and again in recent years. Many people will remember the secret deal that unionist elected representatives agreed to in relation to bonfire injunctions and I think the political declaration leaves no wriggle room. It demands a clear public declaration that there was no secret deal and that no unionist representatives had prior knowledge that contractors were to be sent into the club. If it turns out that there was any prior consultation then there will be hell to pay. There is an election in May.”

Crucially within the political declaration of support political representatives are asked to publicly support the publication of the audio recording of the committee meeting in which the decision to demolish the community hub was taken. Despite such audio recordings usually being published within 2 days of ratification by full council (which took place on 3 December 2018), the People and Communities November meeting is being withheld by council officers.

The statement issued by the club is as follows;

“East Belfast FC on Monday morning met with the DUP and UUP jointly, having also engaged with Cllr Julie-Anne Corr-Johnston from the PUP in recent days. The purpose of the meeting and the ongoing engagement was to raise the serious concerns that the club has in relation to the ongoing agenda of demonisation against the club, which culminated in masked men being sent by the council to demolish a community hub last Tuesday (4thDecember).

“We are pleased to say that the DUP, UUP and PUP have all privately expressed alarm at the events of 4th December, and indicated they understood the frustration felt at how East Belfast FC- and indeed other sections of predominately unionist communities- are being targeted by Alliance and Sinn Fein working closely together to further their shared political objectives.

“We believe that a number of serious legal issues flow from the actions taken, alongside a fast range of health and safety breaches and procedural flaws. This will be the subject of pre-action protocol proceedings being issued against Belfast City Council. If a satisfactory response is not forthcoming from the council then we will move to initiate full Judicial Review proceedings against Belfast City Council forthwith. The bad faith of the council will be a key aspect of any such proceedings. We cannot comment further on these specific points at this time as the council’s actions will be subject to legal proceedings.

“A matter of great concern is the trajectory outlined by communications issued by council officers, which have contained threats in relation to our partnership agreement. The club have felt for some time that there is a political agenda by elected representatives within Sinn Fein and Alliance, aided by some council officers, to drive our club from our long-term home. Many people in the community are aghast that there would be any attempt to take our club’s home ground from us- especially at a time when council are bending over backwards for other clubs- and we have asked our elected representatives to secure a written guarantee from Belfast City Council’s Chief Executive in relation to this matter.

“Following this meeting we have asked the DUP, UUP, PUP and independent unionists to support the following political declaration of support for the club. It is crucial for the community that our political representatives are very clear publicly that they were not aware- either on or off the record- of the planned invasion of our community hub by masked contractors.

“We also ask our political representatives, as part of the declaration of support, to show their support for the publication of the audio recording of the 6 November committee meeting, as is common practice.”

“We, as elected political representatives, fully support the positive work of East Belfast Football Club and oppose the actions taken by masked contractors on 4th December 2018.

“We place on the public record that none of our parties nor any of our political representatives were given prior notice of the planned operation by masked contractors on 4th December 2018, nor were made aware that such a plan was in place beyond that terminology contained within the motion of 6 November 2018.

“We agree to work together, in conjunction with the club, to protect East Belfast FC’s partnership agreement and assist the club in their development plans. Any moves by Council to worsen the situation would be deeply unwelcome instead measures to re-establish and rebuild positive working relationships should be taken forward.”

A large protest took place at the club’s Inverary Avenue on Saturday, you can watch the speeches and interviews with club members and supporters below: