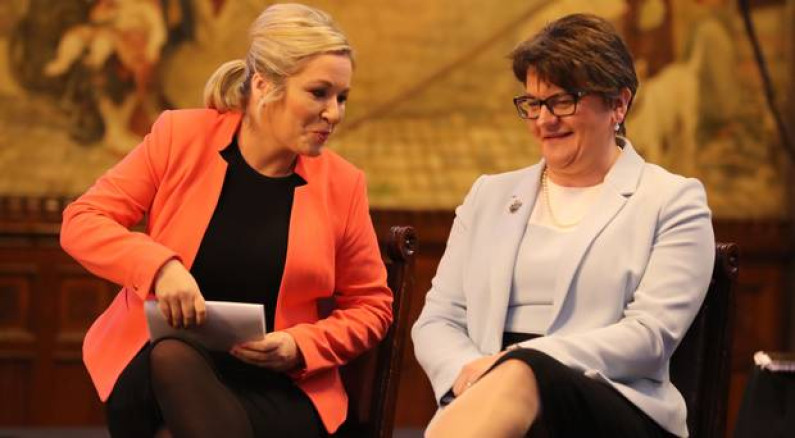 As you will be aware there is in my view deep and significant concern within all sections of unionism in relation to the content of the deal you have agreed in order to pave the way for re-entering the Executive with Sinn Fein.
However, despite the feelings of betrayal and abandonment your acquiescence to this deal has caused, the reality of the situation we now face is that you have made the agreement and there is little that can be done to retrospectively remedy that.

As we move forward in the structures of the ‘New Decade, New Approach’ deal you have locked unionism within, what is important is for those of us who have deep concerns is to understand how you intend to deliver upon the promises you have made in the course of recent days.

In your article within the Belfast Newsletter advocating the deal you stated “This (Irish language) commissioner will facilitate Irish speakers but will not have the power to impose Irish upon those of us who do not speak the language.”

I turn to 5.8 of Annex 4 of the ‘New Decade, New Approach’ document which outlines the statutory functions of the commissioner, one of which is to enhance the language by setting standards for public bodies. I read this in conjunction with 5.9 of Annex 4 which states, inter-alia; “the commissioner will engage with each public body to agree how it can fulfill its requirements under the standards.”

In this context it seems plain to me that implementation of the standards set by the commissioner will be a requirement for all public bodies. Could you please outline for me how in this context you can ensure- as promised- that Irish will not be imposed upon those of us who do not speak the language?

For example, if public bodies by necessity must create jobs in order to deliver translation services or enhance their Irish Language provisions in line with the requirements set by the commissioner, how do you propose that these civil service jobs will not discriminate against those of us who do not speak Irish?

It seems to be bizarre to suggest that what effectively amounts to an Irish job creation scheme in public bodies will not discriminate against those who are unable, or unwilling, to speak Irish?

Within your article advocating the deal you also state the following; “The law will require any standards drawn up by the Commissioner to be submitted to the First and Deputy First Minister for approval.”

For the avoidance of doubt, I do not agree that there is any kind of effective unionist veto, contrary to the implication of your assertion or that put forward by your colleague Mr Donaldson. I entirely reject the suggestion that FM/DFM could impede the statutory functions of a commissioner to enhance Irish by blocking the exercise of such functions.
Of course, similar issues arose in relation to your quite admirable and correct efforts to block legacy inquest funding due to its unbalanced nature, however as you will be aware LJ Girvan found against you in relation to that matter.

I also note that there is a commitment to legislate for the legacy mechanisms agreed at Stormont House within the next 100 days. Your colleague Mr Donaldson has stated via social media that the DUP require changes to the legacy proposals, or they will not support them.

If no such changes- such as ensuring IRA terrorists are not treated in equivalence with their innocent victims- are achieved, then could you outline how the DUP intend to withdraw support for these proposals, which are included in ‘New Decade, New Approach’?

It is telling that in your analysis of the deal you did not claim that Sinn Fein has not obtained stand-alone Irish Language legislation. Indeed, it is my assertion that what they achieved is even more concerning- a stand-alone Bill which will amend the Northern Ireland Act 1998.

This is more concerning than a stand-alone Act because the Northern Ireland Act, as per the House of Lords in Robinson, was- rather outrageously in my view- given the status of a constitutional statute which is to be interpreted “broadly and purposefully”.

It is, in my view, a matter of grave concern that the empowerment and enhancement of the Irish Language is to be contained within the Northern Ireland Act, which in the House of Lords was described by Lords Bingham and Hoffman in Robinson as being “in effect a constitution”. Do you share this concern?

In relation to the Bill which will insert the empowerment and enhancement of Irish Language into the Northern Ireland Act, will the DUP vote for or against the legislative passage of the ‘Amendment 2’ stand-alone Irish Language Bill?

In closing I wish to make clear that I write to you in my capacity as a member of the unionist community and private citizen of Northern Ireland. I have no greater, nor less, standing than any other person within Northern Ireland therefore I entirely accept that you are under no obligation to even take the time to read this open letter, much less respond to it.

Whether you choose to address the points or not, the valid issues raised will not go away and from a personal point of view, a failure to engage in a reasonable effort to ascertain the true position of your party in relation to these matters may suggest to many that the deal you advocate to the unionist people of Northern Ireland is incapable of standing up to any scrutiny.