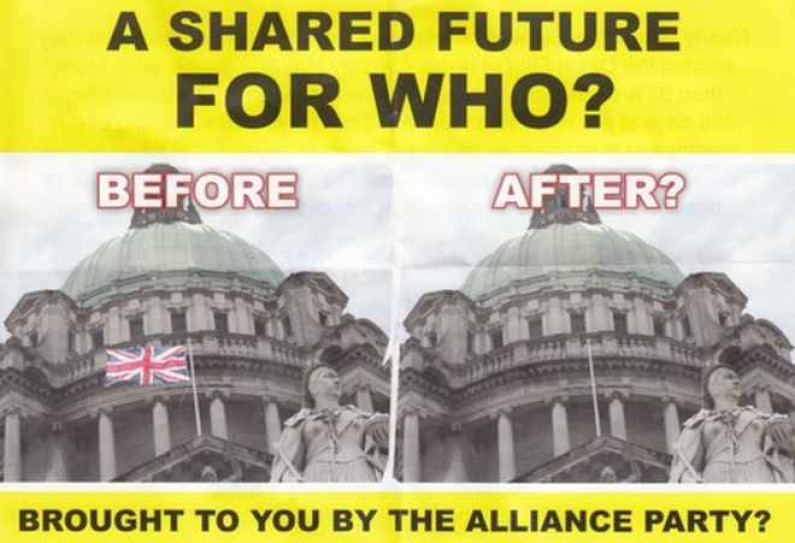 Today’s Irish News has revealed the contents of a ‘leaked’ report into bonfires. The contents of the report has been published in an article by Brendan Hughes. Despite the report being held up as ‘independent’, it was co-authored by the Alliance Party’s Duncan Morrow, a long time opponent of loyalist culture.

The headline provocatively screams “Paramilitary control of loyalist bonfires exposed in leaked report”. This would lead the reader to believe that some factual and substantive evidence of this has been obtained. Yet when one reads the article it is clear this ‘expose’ is based upon the contents of a report, in part written by a senior member of the Alliance Party, which interviewed statutory agencies- many of whom are wholly hostile to bonfires.

It appears that the report, which chimes clearly with the political agenda of the Alliance Party, did not speak to a single bonfire group; instead deciding to write a report into bonfires, without considering the views of bonfire builders. This, of course, is hardly surprising given the liberal elitism of the Alliance Party, who do not believe that loyalism is entitled to contribute to public debate.

A number of the contributors are anonymous, therefore there is absolutely no way to stand up the credibility of their opinions, or scrutinise whether they are even in a position to have any insight into bonfires whatsoever.

The report, co-authored by a senior member of the Alliance Party, was commissioned by the Community Relations Council, whose leader- Mr Peter Osborne- has on many occasions been openly hostile towards all expressions of loyalist culture, and previously headed up a relentless assault on the parading tradition in his role within the Parades Commission.

It is also reported that Belfast City Council were involved in the report. This is the same council, dominated by a ‘progressive’ pan-nationalist coalition of Sinn Fein, SDLP and Alliance, that targeted a number of bonfires last year in a despicable and ultimately failed attempt to use injunctions to demolish traditional expressions of unionist culture.

Interestingly the report also claims paramilitary involvement and points to “evidence of influence on discussions and negotiations with statutory agencies”. This is a rather serious point in so far as anyone mediating on behalf of contentious issues, such as flags and bonfires, are now to be viewed as paramilitaries in the mind of statutory agencies. This means that community representatives are now open to be accused of paramilitary membership and could potentially face charges if they try to mediate on contentious issues, and are deemed to have ‘influence’. This, undoubtedly, will cause many to question the wisdom of engaging with statutory agencies, who appear to be operating duplicitously.

The independent report should open many eyes as to the statutory agenda when it comes to bonfire management schemes. It also lacks credibility given it was written by at least one individual with an anti-unionist agenda, was based largely on anonymous sources from statutory agencies and it did not, at any stage, seek to reach out to the loyalist community.