Former Sinn Fein Finance Minister Mairtin O’Muilleoir is set to be referred to prosecutors relating to an offence of perjury arising from his evidence to the RHI Inquiry. 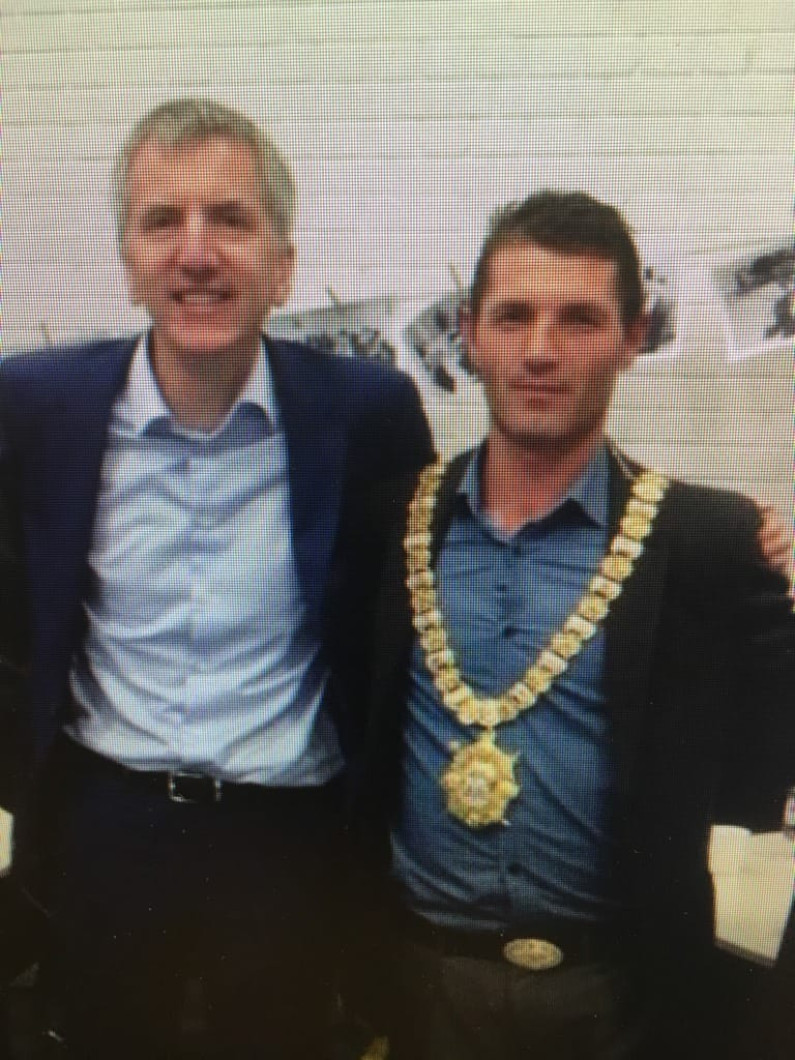 O’Muilleoir is pictured above posing happily with Daniel Serban, who in 2019 was convicted of sending “menacing” online communications as part of a PSNI probe- sparked by Unionist Voice revelations- into the intimidation and exploitation of vulnerable female members of the Roma community in south Belfast. Sinn Fein- the DUP’s partners- stood by O’Muilleoir and his support for Serban and others.

In his appearance before the RHI Inquiry on 23 October 2018 O’Muilleoir informed the panel that he had considered two people from the private sector for the role of Special Advisors. When questioned further by the panel he refused to provide the names and identities of these persons, but said he spoke to one of the persons on the telephone and “especially remembered” this conversation.

Shortly after his appearance before the committee the RHI Inquiry panel served a Section 21 notice on the former South Belfast MLA on 12 November 2018, requiring him to provide the names and other details of the two persons he had referred to in his oral evidence under oath.

A witness statement- with the author identified only as ‘Witness A’- published by the RHI Inquiry states that on this same day- 12 November 2018- after receiving the Section 21 notice, O’Muilleoir telephoned her and asked if he could call to her home that evening for a chat.

The individual informed the then Sinn Fein MLA she was busy and O’Muilleoir had then proceeded to advise Witness A that he had been asked about how he recruited his SpAds and asked her whether he had ever had any discussions with her about recruiting her as a SpAd. It is unclear why he would have ever asked such a question, given he told the inquiry he “especially remembered” the conversation.

Witness A states in her evidence that in fact- contrary to him “especially remembering”, he had never spoken to her about this, to which the Sinn Fein MLA replied, “have we ever had such a conversation even in jest”.
Again, it is unclear why someone who “especially remembered” approaching the candidate for the post would be subsequently asking such a question.

On Saturday 17 November 2018 O’Muilleoir further sent a text message to Witness A asking to meet for coffee on the Sunday, as he had to submit names to the RHI Inquiry on Monday (19 November).

Witness A responded clearly and unambiguously stating “There is no (way) my name can be submitted sorry”.

After initially trying to manipulate Witness A into corroborating his ‘story’ (most people may describe it as a lie) to the committee and being rebuffed on the telephone, and then again being informed in the clearest possible terms via text message less than 48 hours prior to him making his statement that Witness A’s name was NOT to be provided to the inquiry, the former Sinn Fein Finance Minister went ahead and submitted her name anyway.

Witness A became aware of the duplicitous actions of O’Muilleoir and on 28 November sent him a lengthy email which you can read below.

The email clearly challenges O’Muilleoir on his actions and calls into question not only his oral evidence before the inquiry, but also the fact that he submitted a knowingly false statement to the inquiry- which can be demonstrated by text message evidence provided to the inquiry by Witness A.

At the time of the statement’s publication on the RHI website Conor McCauley of the BBC covered the fact Witness A had clearly contradicted the then Sinn Fein MLA’s sworn evidence to the inquiry. Since then it has become clear that bombshell testimony has lead to the fact that prosecutors will receive and consider a file for prosecution in relation to the offence of perjury.

Alongside this it has been reported in the Irish News that O’Muilleoir, who continuously lectured everyone about ‘respect, equality and integrity’ and even once bizarrely claimed that he walked on the “Brightside of the road”, is set to be called before the upcoming Nama trial which it is understood from sources will potentially expose his actions- and those of a number of other senior politicians- whilst he was a member of the Finance Committee investigating NAMA.

The stark detail of Witness A’s statement- and the accompanying evidence- shines a bright light on the dysfunctional nature of Stormont and the reality of how the DUP and SF really do business.

The RHI report, and Nama trial, will prove hugely uncomfortable events for Sinn Fein, the DUP and others. It is unfortunate for them that an RHI political inquiry and a NAMA political show trial are about to come over the hill in tandem, creating a perfect storm which is set to shake the ‘New Decade, New Approach’ DUP-SF marriage of convenience to its very foundations.

It would be surprising if the coming political events did not lead to the resignation of several senior political figures.

However, on the Brightside of the road at least Mairtin O’Muilleoir will be able to give evidence in Irish at the NAMA show trial, and potentially his own trial for perjury. This will all be possible all thanks to the DUP, Sinn Fein’s partners in Government.